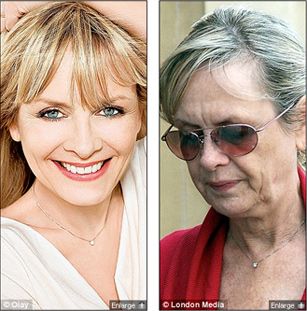 The UK Daily Mail ran the above "before and after" images of the 1960's fashion icon, Twiggy. The caption states: "Spot the difference: Twiggy in her Olay ad (L) looks a far cry from her more natural appearance on a trip to the supermarket (R.)

Legislators in Great Britain and France are out to protect reality — or at least reality as portrayed in photographs.

Concerned that airbrushed photo alterations (often made with the software Photoshop) have gotten out of hand and that the practice is creating misleading expectations, both countries have proposals on the table that would require altered images to be labeled as such. The proposal in Great Britain, led by the Liberal Democrats, also aims to put a ban on airbrushed images in advertisements aimed at children under 16 years old.

British member of Parliament Jo Swinson told the Telegraph that airbrushing is detrimental to the confidence of women and young girls who find themselves striving for an “unattainable” reality. Swinson continued saying, “Liberal Democrats believe in the freedom of companies to advertise but we also believe in the freedom of young people to develop their self-esteem and to be as comfortable as possible with their bodies, without constantly feeling the need to measure up to a very narrow range of digitally manipulated shapes and sizes.” She believes that regulation could be achieved without legistion, hoping that Britain’s Advertising Standards Authority would encourage advertisers to comply.

In France, the fight to have all airbrushed images labeled was proposed in September by a conservative parlimentarian, Valérie Boyer, who is now supported by 50 other politicians. Explaining her position to Time magazine, Boyer said “When writers take a news item or real event and considerably embellish it, they are required to alert readers by calling the work fiction, a novel or a story based on dramatized facts. Why should it be any different for photographs?”

Boyer’s proposed legislation would apply to all photos meant for public distribution, which would be required to carry a label stating “Photograph retouched to modify the physical appearance of a person.” Violations could bring a fine of $55,000 or up to 50 percent of the cost of the advertisement.

Airbrushing isn’t a new technique, but continues to garner criticism when it is blatantly misleading. A recent ad campaign for Olay anti-aging cream featuring 1960s British supermodel Twiggy raised eyebrows (those that weren’t paralyzed by Botox) when compared to a snapshot of the model without the aid of airbrushing. Keira Knightly’s chest got an airbrushed-lift on posters for the 2004 movie, “King Arthur.” And in 2007, the magazine Paris Match slimmed the sides of President Nicolas Sarkozy‘s stomach.

In August, Scott Kelby, the president of the National Association of Photoshop Profesisonals told the Los Angeles Times that he believes “…every single major magazine cover is retouched. I don’t know how they couldn’t be.” Times writer Jeannine Stein goes even further, positing that “it’s quite possible that the vast majority of images seen in the public arena have been altered.”