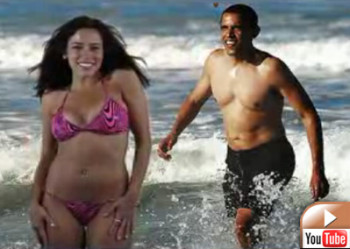 These days, you know you’ve made it as a frontrunner in the U.S. Presidential race when you’ve got your name plastered across a pair of “booty shorts” in a YouTube music video.

Yet, Democratic presidential hopeful Barack Obama had nothing to do with this latest publicity coup, which features a curvaceous model swooning over his green-screened image. Tapping into early campaign fervor, a journalism student, record producer, and digital marketer have successfully promoted their website, barelypolitical.com, by releasing a mock music video featuring the most headline grabbing candidates for 2008. Their mock video, titled “I got a Crush on Obama,” attracted 2.5 million hits in a month.

In addition to selling their catchy song to iTunes, the entertainment posse is also selling t-shirts and other apparel bearing the slogan “I got a crush on Obama.” With the massive interest in the Obama Girl video, “Barely Political“ has also released a sequel which depicts “Giuliani Girl,” who engages in a dance-off with her “Obama Girl” nemesis.

These videos are far lighter in tone than some recent political viral videos. One of the most memorable was the “Vote Different” video – produced by computer designer Phil de Vellis in anticipation of the Democratic primary. The video itself was a spin-off of the Apple “1984” ad, which depicted an Orwellian robotic crowd ogling an image of Hillary Clinton projected on a massive movie screen.

After the Obama Girl videos were released on YouTube, they spread into the blogosphere and aired on over 150 news stations worldwide. Last week, a tittilated Chris Mathews of MNBC  (who seemed on the verge of drooling) interviewed the video’s star, bikini model Amber Lee Ettinger.  In another interview, when Ettinger was asked by CNN Reporter Jeanne Moos whether she had heard back from the real life Mrs. Obama, she coyly conceded, “not yet.”

While the Obama Girl video has sparked many popular spin-offs, including a video titled “Hot for Hillary,” it has also served an important function: lightening the rhetoric of a campaign season in full swing a year-and-half before the vote.

Though the Barely Political crew may be using politics as a vehicle to launch their careers in Hollywood, the videos have also helped to flesh out the candidates featured in them. Whether or not the videos offer any new political insights is up for debate. But one thing is certain – they are a major departure from the pre-packaged press shots we are used to seeing. Gyrating models can soften the image of even the most wooden politician. And the sight of Amber strolling side-by-side with a swim-trunk clad Obama will force even the most jaded viewers to indulge in their own “political” fantasies.

The candidates are just now getting in on the streaming video game. The Democrats held their first CNN/YouTube debate on July 23rd, broadcasting directly to online viewers. (The Republicans are lined up to hold their own online debate this fall.) Although Anderson Cooper was the event’s mediator, the more impromptu format allowed viewers to ask candidates questions directly, and in real time, such as this one posed to Obama and Clinton: “How do you address being ‘black enough’ or ‘woman enough?’” Obama and Clinton both replied that they would rather run on their qualifications rather than their respective race and gender.

In spite of the huge interest, neither Barack Obama nor Rudy Giuiani have offered a response to the portrayals. But they should.

The Internet has become a potent political public relations machine – but one in which candidates are not fully in control of the message. As Obama Girl begets Giuliani Girl – and spawns the Hot for Hillary hottie  – campaign managers who, to this point, have declined to comment may want to acknowledge that their candidates’ alter egos are thriving in the world of YouTube music videos.

Perhaps candidates, in addition to hiring campaign managers, might also think about hiring music video directors and image consultants to polish their on-screen personas. In our political rock star universe, this might just be the best way to tap into the political consciousness of the new MTV generation of voters.