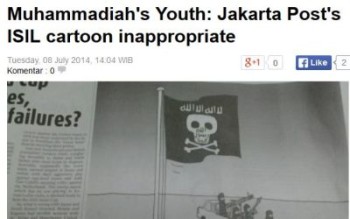 The cartoon in question, detail (via Republika)

Indonesian newspaper The Jakarta Post apologized July 8 for an offensive cartoon about the terrorist group ISIS (Islamic State in Iraq and Syria).

The cartoon was published July 3 in print. According to the apology, “The cartoon contained religious symbolism that may have been offensive.”

Indonesian news site Republika published the cartoon on its website, which it described as showing “a militant trying to raise a flag bearing the image of a skull and an Arabic verse ‘Laa ilaha ilallah.'”

That verse is a “Muslim holy phrase,” according to Republika.

Islamist group Jamaah Ansharut Tauhid complained about the cartoon, according to the Post.

The U.S. National Counterterrorism Center identifies Jamaah Ansharut Tauhid (or JAT) as “an Indonesia-based extremist organization founded by radical cleric Abu Bakar Bashir (also known as Abu Bakr Ba‘asyir and similar variants) in July 2008 to advance an absolutist interpretation of Islamic law with the ultimate goal of establishing a caliphate in Indonesia.”

The Jakarta Post apology and retraction reads in full:

“We sincerely apologize for and retract the editorial cartoon printed on page 7 in the July 3, 2014, edition of The Jakarta Post.

“The cartoon contained religious symbolism that may have been offensive.

“The Post regrets the error in judgment, which was in no way meant to malign or be disrespectful of any religion.

“Our intent was to critique the use of religious symbols (specifically the ISIL flag) in acts of violence in general and, in this case, against fellow Muslims. In particular, it was meant as a reproach of the Islamic State of Iraq and the Levant (ISIL), which has threatened to attack the Holy Ka’bah in Mecca as part of its political agenda.”

iMediaEthics has written to The Jakarta Post for more information. We’ll update with any additional information.

Daily Californian's Coronavirus cartoon had 'harmful stereotype'
Corrections: The Roomba didn't do it! Irish Libel Law, Irish or British, How many Troops Abroad?