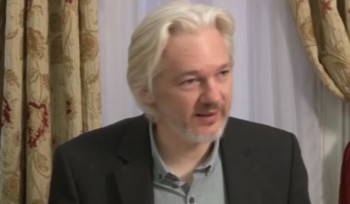 Amidst reports of ill health, WikiLeaks founder Julian Assange, who has been staying at the Ecuadorean Embassy in London for two years, gave a press conference Monday indicating he may leave the embassy, the New York Times reported.

“I am leaving the embassy soon,” he said, according to a video clip of the press conference posted by the Guardian.

While no timeline was given, a WikiLeaks spokesperson said “his suitcase is packed,” according to the Guardian.

Assange was granted political asylum in 2012 by Ecuadorean foreign minister Ricardo Patino. Assange went to the embassy in June of that year in order to avoid being extradited to Sweden for questioning about accusations of sexual assault there. He had been jailed and was bailed out, after which Sweden issued an international arrest warrant for him. Assange had appealed extradition to Sweden but the UK Supreme Court dismissed his application.

Describing Assange’s press conference as “long and meandering,” the New York Times reported Assange confirmed he did have health problems. However, he challenged news reports about his leaving the embassy.

Assange said at the press conference his leaving the embassy was “perhaps not for the reasons that the Murdoch press and Sky News are saying at the moment,” the Guardian reported.

Sky News reported Aug. 18 “Assange ‘could be planning surrender,'” citing its crime correspondent saying Assange has lost “a lot of the fighting spirit.” The correspondent, Martin Brunt, listed a host of medical issues he said Assange is dealing with: ‘He’s said to have a heart condition, a chronic lung complaint, bad eyesight, high blood-pressure, all as a result of … two years in the Ecuadorian embassy.”

Assange still maintains that if he leaves the embassy and is extradited to Sweden over years-old accusations of sexual assault, the U.S. will extradite him for publishing leaked U.S. documents on WikiLeaks. The New York Times noted, “The United States has not sought Mr. Assange’s extradition, and there has been no public indictment of him.” He also hasn’t been indicted in Sweden.

Despite Assange’s vague plans to leave the embassy he won’t “turn himself in,” the Times reported a WikiLeaks spokesperson, Kristinn Hrafnsson, said.

A spokesperson for the British government told the Wall Street Journal that “We are clear that our laws must be followed, and Mr. Assange should be extradited to Sweden.” The spokesperson said “we look to Ecuador to help bring this difficult, and costly, situation to an end.”