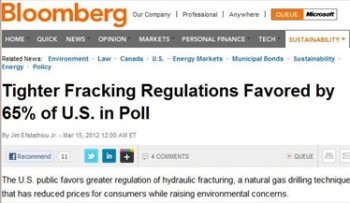 A Bloomberg article recently announced that, according to its latest poll, 65% of Americans favor tighter fracking regulations, more than three times greater than the 18% who favor less regulation. (Just 17% said they were unsure.)

That’s an amazing figure when you think about it: Really, 83% of Americans have actually heard of fracking? That’s more than know the earth revolves around the sun!

Well, as it turns out, we don’t really know how many Americans have heard of the gas drilling process after all. Apparently, Bloomberg recognized that few Americans might be aware enough of fracking to say whether it needs more regulation. So, instead of asking how many had heard of the process, and finding that too few knew anything about it to have formed an opinion (thus negating the whole purpose of the poll!), the polling group simply fed respondents a brief description of what it was:

“A process known as ‘hydraulic fracturing’ or ‘fracking’ involves injecting liquids into the ground.  It has resulted in a significant increase in production of natural gas, accompanied by a steep drop in its price. Critics have said it is linked to tainted water supplies and earthquakes.”

Immediately afterward, Bloomberg followed up with this question: “Based just on what you know [i.e., what we have just told you], do you think there needs to be more regulation or less regulation of fracking?”

That’s how the poll “found” a 65% to 18% margin in favor of increased regulation.

Now, I’ve got to admit that I personally prefer to see some entity, including the government if necessary, try to reduce the risk of tainted water supplies and earthquakes. Call me a bleeding heart environmentalist if you wish, but I really do like to drink clean water.

Still, my personal idiosyncrasies aside, I’m also interested in polls that give a realistic picture of what the public thinks, not what journalists or I think. The Bloomberg poll hardly meets that standard. It precedes the question with a biased introduction, which essentially calls for some regulatory remedy. Then it uses a forced-choice question to pressure respondents to give a judgment, even if they had no knowledge about fracking beforehand – and instead know only the negative information that Bloomberg provided them. Is it any wonder that so many called for the remedy hinted at by Bloomberg’s introduction?

I wrote to Jon Morgan, the Bloomberg editor in charge of the story, to ask if he couldn’t also see the obvious bias:

“It seems to me, the question itself encourages a ‘more regulation’ response, don’t you think?

“What do you think?”

Morgan was concise, if not especially enlightening:

I wrote back to see if he cared to elaborate. He did not respond.