Why did the MSM make it so hard to watch the Billy Graham funeral? - iMediaEthics

Why did the MSM make it so hard to watch the Billy Graham funeral? 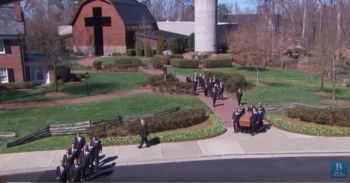 Devil’s advocacy time: I ask you to put aside your own philosophical biases a moment for a dispassionate discussion on media agenda-setting and whether the “MSM” is out of touch with the American people.

On March 2, I was interested in watching the Billy Graham funeral service in Charlotte.  I’m one of tens of millions of Americans who grew up admiring him. I don’t know if this was a decision made at network or by local affiliates, but I checked all the affiliates for ABC, CBS and NBC in my cable area and saw nothing but the usual daytime syndicated garbage.  OK, so I switched to CNN, where talking heads were discussing the security clearances of Ivanka and her hubby. So I switched to Fox News, which I rarely do.

During the hour-long, commercial-free service, I occasionally switched back to CNN. Lots of commercials, and a lengthy interview with Chuck Schumer on the “chaos in the West Wing,” as the super said. [Trump, meanwhile, was at the funeral.]

The most poignant eulogy in the Graham service was from his third daughter, Ruth, who recalled how she entered into a disastrous and fleeting second marriage against her parents’ advice. She said she came home, apprehensive as to whether she’d be greeted with recrimination. Instead, she said, her father greeted her in the driveway. “There was no shame, no blame, no condemnation,” she said, fighting back tears, “just unconditional love.”

She added, “My father wasn’t God, but that day he showed me what God is like.”

I watched the brief report on the funeral on the CBS Evening News, which had a short soundbite from Billy Graham’s son Franklin’s eulogy to his father, but omitted daughter Ruth’s. Too bad. It was much more moving to hear than to read my poor second-hand account.

I bring all this up because I recall that the networks carried live special reports, as they should have, for the memorial services for the 243 victims of the Marine barracks bombing in Beirut in 1983, for the Challenger and Columbia astronauts and the Oklahoma City bombing victims, and of the major anniversaries of D-Day and 9/11. As I recall, Ted Kennedy’s 2009 memorial service was also carried live; I watched it. In 2013, so was Nelson Mandela’s. But the memorial service for one of the most influential figures of the 20th  century was off the agenda in favor of game shows and Chuck Schumer?

Yes, we’d all have to agree that that there is “chaos in the West Wing” and that it’s a legitimate story. But wouldn’t that story still be there for analysis after the one-hour Graham funeral was over? This isn’t even a liberal-vs.-conservative issue, because Graham was a friend and adviser to presidents of both parties. George W. Bush and Bill Clinton [sans Hillary] both came to Charlotte earlier in the week to pay their respects. He was one of very few Americans who was almost universally respected.

The contrast in the news coverage was stark and obvious. This isn’t a case of the major networks and CNN losing Middle America to Fox. It’s a case of them throwing away Middle America and Fox picking it up. And we wonder why we were blindsided by the results of the 2016 election? It’s something to dwell on.

At the Excellence in Journalism convention in Anaheim last September, I heard a lot of panelists talking about “regaining the trust of the American people.” Ignoring the Billy Graham funeral wasn’t an auspicious start.

“It is so pleasant to learn about new things. Every day I find how little I know, but I do not feel discouraged since God has given me an eternity in which to learn more.” —Helen Keller (1880-1968), American blind and deaf author, lecturer and activist

“When I stand before God at the end of my life, I would hope that I would not have a single bit of talent left, and could say, ‘I used everything you gave me.’” Erma Bombeck (1927-1996), American journalist, humorist, columnist on family issues and author

Why did the MSM make it so hard to watch the Billy Graham funeral?