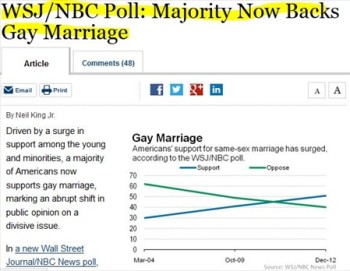 Since May of this year, when President Obama announced his support, the average poll margin in favor of same-sex marriage has been about six percentage points (which I calculated from poll results archived at PollingReport.com). The average of these polls also shows about 43% to 44% of Americans opposed to same-sex marriage, which of course is a substantial number.

But as I discussed in iMediaEthics’ own poll report on this topic, it’s important to examine the intensity with which people hold their views.  While many people don’t really care much about an issue one way or the other, most polls don’t measure such indifference.

The recent NBC/WSJ poll, however, did measure intensity and finds the vast majority of Americans either support or at least don’t actively oppose gay marriage.

As I’ve earlier indicated, research has shown that people who do not favor an issue “strongly” tend not to be “upset” if the opposite condition prevails from what they’ve just said they prefer. Thus, for practical purposes, if respondents indicate a tepid intensity about an issue, it typically means they don’t really care one way or the other.

This poll shows about an even split among people who feel deeply about the issue (33% in favor, and 30% opposed), with another 37% who don’t feel strongly either for or against gay marriage.

Another question included by the NBC/WSJ poll makes even clearer the lack of public intensity on this issue:

Almost six in ten Americans (58%) would not actively support or oppose legislation that legalized same-sex marriage in their state, while 25% would actively support it, and 16% actively work to overturn it.

These results help to explain why the issue of same-sex marriage was not salient during the recent presidential and congressional elections. The vast majority of Americans don’t seem to mind whether gays and lesbians may legally marry or not.