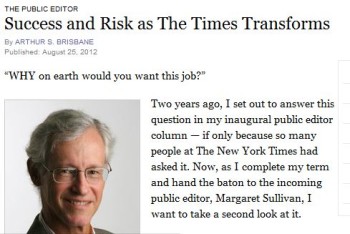 Arthur Brisbane’s final column as New York Times public editor repeated his 2010 calls for “transparency, accountability, humility” at the Times across its website, print product, mobile sites and so on.

Brisbane, whose two-year term ends this month, argued that “The Times is hardly transparent” because “Times policies” aren’t easily available on its website, but did praise the Times’ corrections department for being “a powerful engine of accountability.”  (Last year, Brisbane called for op-ed writers to be more transparent and earlier this year about transparency in editing online articles, as we have written.)

“As for humility, well, The Times is Lake Wobegon on steroids (everybody’s way above average). I don’t remember many autopsies in which, as we assembled over the body, anyone conceded that maybe this could have been done differently.”

He added that the Times “is powerfully shaped by a culture of like minds” and that “many share a kind of political and cultural progressivism” leading to reporting on “the Occupy movement and gay marriage” becoming “overloved and undermanaged, more like causes than news subjects.”

New York Times executive editor Jill Abramson countered outgoing public editor Arthur Brisbane’s argument that the Times has “a kind of political and cultural progressivism,” and some topics like “the Occupy movement and gay marriage” are “overloved and undermanaged, more like caused than news subjects,” Politico reported.

Abramson said to Politico that “In our newsroom we are always conscious that the way we view an issue in New York is not necessarily the way it is viewed in the rest of the country or world. I disagree with Mr. Brisbane’s sweeping conclusions.”  But, she noted that ” in covering some social and cultural issues, the Times sometimes reflects its urban and cosmopolitan base.”

We are writing to Brisbane to see if he has any comment and will update with any response.

UPDATE: 8/27/2012 10:00 PM EST: Brisbane responded to iMediaEthics’ request for comment after Abramson’s remarks, writing that “I really don’t have anything to add.”  We also asked Brisbane what his plans are after he leaves the Times. Brisbane wrote: “post-Times plans are a work-in-progress. will do some writing for sure.”