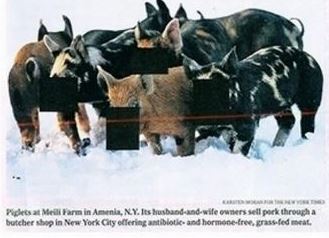 A close up of the censored photo, as published in the Malaysian version of the International New York Times . Note the black squares over the pigs' faces. (via BusinessInsider)

The Malaysian publication of the International New York Times censored the faces of pigs Jan. 22.

According to the Malaysian Insider, the printing company explained the censorship was done out of deference to Muslim guidelines. The anonymous source at KHL Printing Co. said: “Malaysia is a Muslim-majority country and there are certain ‘understood’ rules and regulations.”

An anonymous KHL Printing Co. employee said to the AFP:

“This is a Muslim country, so we covered the pigs’ eyes…We usually do that for the International New York Times – also for pictures of cigarettes, weapons, guns and nude pictures.”

Malay Mail Online reported that its KHL Printing Co. source said the government didn’t call for the censorship. “He added that the printing firm had not received express instructions from authorities to censor the pictures,” Malay Mail Online wrote.

“What they have done is self-censorship because I think we don’t really have any laws to say that they should not have these kind of photos.”

Jaafar went on: “Sometimes, we have to look into the context and see why they use these the photos, like this is to explain the rising demand for pigs, why would we say they can’t use this picture?”

Of course, since the anonymous KHL Printing sources spoke to different publications, there is no way to confirm if the same anonymous source explained the pig censorship or if there were three different sources, iMediaEthics notes.

Times spokeswoman Eileen Murphy told Jim Romenesko of the photo doctoring and censorship: “We were not aware of this before the newspaper was printed and we are discussing it with our printing contacts in the region.”

The photos in question were published on the front page and page 19, according to the Malay Mail Online.

The Huffington Post collected a series of tweets by readers critical of the censorship.

iMediaEthics has written to KHL Printing for more information and will update with any response.