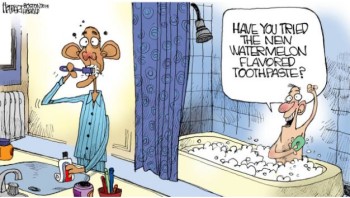 The controversial cartoon shows President Barack Obama in a bathroom brushing his teeth. Behind him, a man is in a bubble bath asking “Have you tried the new watermelon flavored toothpaste?” Its caption read: “White House Invader Got Farther Than Originally Thought.”

For those too young to know, a time-worn African-American racist slur identities blacks with watermelon.

Cartoonist Jerry Holbert’s cartoon syndicate told Holbert to edit his cartoon, which evoked this ugly stereotype. So in other versions of the cartoon, the toothpaste is raspberry-flavored.

Sadly, it was the original racist reference with the watermelon-flavored toothpaste that was run by the Boston Herald.

Holbert said he had already submitted the cartoon to the Herald before the syndicate wanted changes. He later acknowledged he should have told the newspaper.

The cartoon was meant to play off the September incident where a man, Omar Gonzalez, was able to dodge security and gain access to the White House, Reuters reported. Despite initial claims he was stopped at the North Portico doors of the White House, he actually entered the East Room, NBC News reported.

“It’s my job as an editor to see around corners, to look at all the possible meanings and nuances of words and of images,” Herald editorial page editor Rachelle Cohen wrote today. “It’s my job and two weeks ago I failed at it miserably. And that’s all on me and this is why.”

So goes a second round of apologies over the Oct. 1 cartoon.

The Boston Herald first apologized on the day the Oct. 1 cartoon was published, after complaints of racism.

That said, Holbert apologized Oct. 1 on Boston Herald Radio saying, “I want to apologize to anyone I offended who was hurt by the cartoon.”

Holbert went on, “I was completely naive or innocent to any racial connotations. I wasn’t thinking along those lines at all.”

The Herald apologized Oct. 1 as well. It said, “As Jerry Holbert discussed on Boston Herald Radio this morning, his cartoon satirizing the U.S. Secret Service breach at the White House has offended some people and to them we apologize.  His choice of imagery was absolutely not meant to be hurtful. We stand by Jerry, who is a veteran cartoonist with the utmost integrity.”

Then on Oct. 4, the Herald’s spokesperson Gwen Gage issued a statement calling the cartoon “unacceptable in its insensitivity and racial overtones.” Gage added that “Both the newspaper and cartoonist intended no such inference and immediately apologized for the pain its publication may have caused,” the Associated Press reported.

In an Oct. 15 op-ed, Cohen, the editor of the editorial pages, who was the editor who had the responsibility and oversight, wrote that she was the person who let the cartoon slip through.

Cohen explained that she was the only editor to approve the cartoon because the publisher doesn’t see images in advance and the night before the cartoon’s publication, the proof of the page didn’t make it to other editors. She was transparent and detailed what went wrong. She wrote:

“Yes, a final page proof does go up to the 6th floor where a desk editor will read the editorials, make sure we haven’t made some obvious error of fact and in the event a topic has been overtaken by breaking news events will pick up the phone and advise me that we need an update. On the night in question — the night the cartoon appeared on a page proof, the proof was not left in the proper bin. No senior news editor ever saw it.

“And every evening the publisher gets a copy of the editorials sent to his email — not the images — only the words.”

Bigger Fall-Out for the Herald

Cohen noted that the error has affected the Herald‘s ability to produce news coverage, as the governor of Massachusetts criticized the newspaper. She said her op-ed was meant to explain to all readers that the Herald‘s news staff had nothing to do with the cartoon and it was a failure of the editorial side.

Massachusetts governor Deval Patrick, who the AP noted is “the state’s first black governor,” called the cartoon both “offensive” and “stupid,” according to UT San Diego.  Then, a week ago, the Herald tried to ask Patrick questions about race and Patrick “snapped” at the reporter, Cohen said.

Patrick apologized to the reporter, saying his reaction was related to having seen the cartoon in the Herald‘s pages.

The Boston Herald also set up a meeting with the NAACP to discuss the cartoon, the Associated Press reported earlier this month.