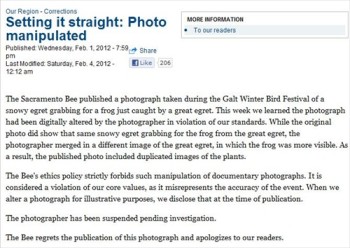 According to Myers and the Sacramento Bee, an investigation into Patrick’s work was launched earlier this month after a reader tipped off the newspaper’s editors about a questionable photo “of an egret eating a frog” and Patrick was suspended.  See here the Sacramento Bee’s note announcing his suspension and apologizing for the egret photo, which turned out to be a composite.

So far, the Sacramento Bee has determined at least three of Patrick’s photos in the past three years were “digitally manipulated,” according to Poynter’s Myers. The newspaper published a Feb. 4 note disclosing that Patrick was fired  “for violating the paper’s ethics policy forbidding manipulation of documentary photographs.”

In  a Feb. 3 post, Poynter’s Craig Silverman noted that the Sacramento Bee “did not name the photographer” in question. Silverman called for news outlets to “hold ourselves to the same standard we enforce on others” and not shield “the offender.”