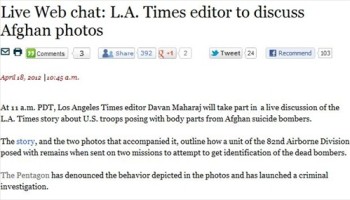 The Christian Science Monitor questioned if the Los Angeles Times made the “right call” in its April 18 publication of photos of “smiling US troops in Afghanistan posing with the remains of suicide bombers.”

Specifically, Christian Science Monitor wondered : “What is the newspaper’s responsibility to national security weighed against informing the public?”

Christian Science Monitor cited the opinions of Poynter’s Bob Steele and Meredith College associate professor Doug Spero.  Steele argued that it was OK for the Los Angeles Times to run the photos since the newspaper “made a thoughtful, deliberate, and justifiable decision to publish those images.”

Spero, however, a former “news director and a reporter covering military installations,” described this as a “very sticky issue” that should be analyzed on a case-by-case basis. He explained:

“If I received a call and [military officials] made any practical or logical sense on why this would endanger troops – and the story value wasn’t that high – I’d cooperate. Not only for future relationships, but if there is going to be an error made, I’d would rather it be on the side of national security and pro-defense.”

According to the Los Angeles Times report, “The Army launched a criminal investigation after the Los Angeles Times showed officials copies of the photos, which recently were given to the paper by a soldier from the division.”  The solider was granted anonymity and was interviewed for the article.

The Los Angeles Times quoted Army spokesperson George Wright as explaining that “It is a violation of Army standards to pose with corpses for photographs outside of officially sanctioned purposes.”

“After careful consideration, we decided that publishing a small but representative selection of the photos would fulfill our obligation to readers to report vigorously and impartially on all aspects of the American mission in Afghanistan, including the allegation that the images reflect a breakdown in unit discipline that was endangering U.S. troops.”

Maharaj also told Poynter’s Steve Myers in the webchat that the Los Angeles Times ran just the two pictures because the pair “clearly and unambiguously depict conduct that the Army described as inappropriate” and the other images weren’t selected “on grounds of taste, relevance or repetitiousness. ”

The New York Times reported that defense secretary Leon E. Panetta explained “at a news conference” that the military’s issue with the pictures is that “those kinds of photos are used by the enemy to incite violence, and lives have been lost as the result of the publication of similar photos.”

Also, Pentagon press secretary George E. Little told the New York Times that “Our concern is not about embarrassment. We recognize that this is inexcusable behavior depicted in the photos. This is all about force protection in Afghanistan.”

We’ve written previously about what we have found to be a “troubling double standard” in the American media where graphic, gory and bloody photos of dead foreign victims will be published but similar photos of Americans won’t be seen in the U.S. press.  In this case, iMediaEthics focused on the media reporting of the 2007 murder of Pakistan former Prime Minister Benazir Bhutto.