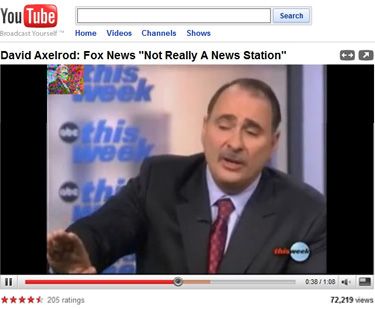 What began as a fact-checking mission escalated when missiles were launched, and has now morphed into a full-blown battle between the White House and Fox News.

Round 3 began this past Sunday, October 18, 2009, when White House senior adviser David Axelrod appeared on ABC’s “This Week” and told host George Stephanopoulus that Fox News is “not really a news station.” That same day, chief of staff Rahm Emanuel appeared on CNN’s “State of the Union” and echoed Axelrod’s statement, telling host John King, “the way to look at it and the way the president looks at it and we look at it, is, it [Fox News] is not a news organization so much as it has a perspective.” But Emanuel then went further, suggesting that Fox’s style of communiction could tarnish other news outlets. “And more importantly, is not have the CNNs and others in the world basically be led and following FOX, as if what they’re trying to do is a legitimate news organization.”

As Eric Etheridge wrote on the New York Times Opinionator blog, “if the White House is playing this as an effort to correct erroneous stories, most everyone else sees it as war on Fox.”

Etheridge excerpts other opinions, including that of right-leaning Peter Wehner who described the White House’s campaign against Fox News as “vaguely Nixonian” in Commentary magazine. Wehner continued, writing “It is one thing to set the record straight when specific false charges are made by individual reporters and commentators. But the tactic of a blanket attack against a network like Fox will, I think, end up damaging Barack Obama.”

Unsurprisingly, Fox News agrees. Former senior adviser and deputy chief of staff to George W. Bush, Karl Rove, now a contributer to Fox News, said “This is an administration that’s getting very arrogant and slippery in its dealings with people. And if you dare to oppose them, they’re going to come hard at you and they’re going to cut your legs off.”

In his New York Times Media Equation column, writer David Carr provided a litany of former presidents who took on the press and concludes that the battle isn’t worth fighting. “Even though almost all the critiques contained a kernel of truth,” Carr wrote, “in each instance the folks who had the barrels of ink, and now pixels, seemed to come out ahead. So far, the only winner in this latest dispute seems to be Fox News. Ratings are up 20 percent this year, and the network basked for a week in the antagonism of a sitting president”

Carr also hinted that the administration had misplaced the web-savvy that buoyed Obama’s campaign, pointing out that the White House “Reality Check” site “sounds a bit like the blog of some unemployed guy living in his parents’ basement, not an official communiqué from Pennsylvania Avenue.”

As Etheridge points out, not everyone is put off by the White House’s approach. After Anita Dunn’s initial accusations on CNN’s “Reliable Sources,” Jacob Weisberg writing for Newsweek argued that Fox’s coverage of Dunn confirmed Dunn’s claims. “Consider Fox’s Web story on the episode. It quotes five people. Two of them work for Fox. All of them assert that administration officials are either wrong in substance or politically foolish to criticize the network. No one is cited supporting Dunn’s criticisms or saying that it could make sense for Obama to challenge the network’s power. It’s a textbook example of a biased journalism.”

And Weisberg doesn’t stop there. He agrees with Emanuel’s sentiments about Fox contaminating other news outlets and asks that his colleagues stand up for their industry. “Whether the White House engages with Fox is a tactical political question. Whether we journalists continue to do so is an ethical one. By appearing on Fox, reporters validate its propaganda values and help to undermine the role of legitimate news organizations.”

For other responses to the White House/Fox News conflict, see Eric Etheridge’s post on the New York Times Opinionator blog.