Rupert Murdoch on his Secretly Taped Comments about Hacking, Bribery Scandals: ‘I regret my choice of words’ 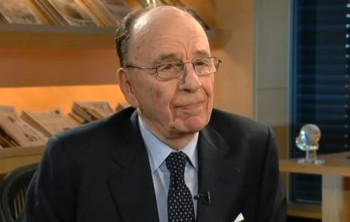 Rupert Murdoch in an interview a few years ago. (Credit: YouTube, "SkyNewsAustralia," screenshot)

In a July 17, 2013 letter to a member of Parliament, Rupert Murdoch responded to the secretly recorded tape of him discussing hacking and bribery, arguing that his comments were taken out of context. He added that he “should never have” said the police investigation into media wrongdoing was “incompetent.”

In the tape, recorded back in March 2013 at a meeting at the Sun newspaper and published this month by news website Exaro News, Murdoch is quoted as saying that paying cops for tips was widespread at UK newspapers, and that “it was a mistake I think,” for News Corp’s Management and Standards Committee to provide information and records to the police investigation of News Corp’s UK papers. As iMediaEthics wrote earlier this month,UK Parliament has requested Murdoch re-appear to go over his comments.

Murdoch’s July 17 letter to Parliament member Keith Vaz, the chairman of the Home Affairs Committee, addressed the recording, which he said was made by “one or more of the employees” in attendance. But, he gave himself some wiggle room from his remarks, commenting that he doesn’t “have a reliable transcript of the content or context of that difficult meeting.” As such, he wrote that he was basing his explanation on excerpts that don’t have “either the full content or context of the meeting.”

According to the Guardian, Murdoch’s letter to Vaz is “the first time” Murdoch has commented on the secret recording.

Murdoch tried to explain away what he said to the staff of the Sun by saying he “used the wrong adjectives” to describe the police investigation.

He also said that News Corp recognizes the severity of the accusations against its properties in the UK. He noted that the company has spent more than “65 million pounds” to obtain and turn over “more than 23 million electronic documents” voluntarily to the police.

Hardly contrite, Murdoch further defended his characterizations of the investigation as “incompetent” because he said he was facing the investigation’s “impact on families, including suicide attempts and medical conditions.”

“I regret my choice of words in that highly emotional meeting,” he wrote, later commenting that he “should never have” made the comment, even though he does think the investigation “has in some respects appeared to be excessive.”

In terms of his remarks about not giving more information to the police, Murdoch claimed he was referring only to follow-up requests from the police that News Corp determined was “unreasonable or in pursuit of materials already provided.”

Unbowed by the crimes committed by members of his staff, Murdoch said News Corp had already “volunteered a mountain of evidence” and worked with the police on “over 98%” of “1,900 follow up requests.”  As such, Murdoch argued “it would not be fair even to suggest that our Company has impeded the MPS.”

Rupert Murdoch on his Secretly Taped Comments about Hacking, Bribery Scandals: ‘I regret my choice of words’