Editors from the Hilton Head Island Packet, the Gullah Sentinel and the Sav 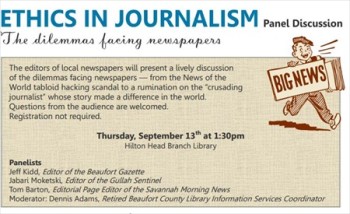 Kidd told iMediaEthics by email that the event was “open to the public.”

Kidd blogged about the Sept. 13 forum and “some of the more provocative questions” raised during the event, including graphic photos and bias.  For example, Kidd wrote the newspaper decides to publish graphc photos based on newsworthiness:

“If a photo would advance most readers’ understanding of an important story, it is likely to be published; if displaying it would merely be gratuitous or sensational, we would not. We don’t apologize for eliciting emotion through a photo, but we’re not trying to make you yak up your Corn Flakes, either.”

Kidd also wrote that “skepticism paired with compelling story-telling is the very basis of journalism… I think, however, the industry generally conflates skepticism with cynicism, which, in turn, makes us prone to inject our philosophies where facts belong.”

Concerning bias, Kidd diffentiated between bias in covering certain topics more than others — like local news over non-local news — and “political bias,” which he argued “tends to appear where group-think prevails and conventional wisdom goes unchallenged.”

The “forum was recorded” and aired on TV, according to Kidd.  Kidd told iMediaEthics by email that “We have no current plans for another such forum, but I’m sure our publisher would agree to allow staff members to participate if a reputable organization conducted one that was at a time and place convenient to our staff.”

iMediaEthics has written to the Gullah Sentinel, the Savannah Morning News, and the Beaufort County Library seeking more information and will update with any response.