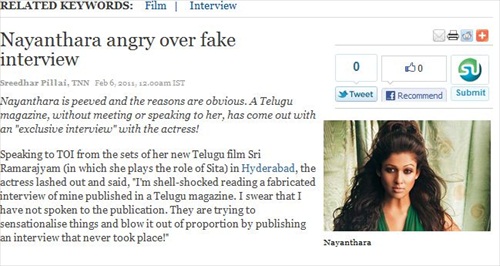 Indian actress Nayanthara has reportedly accused a film magazine of making up a fake interview with her. (Credit: Times of India)

As iMediaEthics previously reported, a group of 25 Turkish journalists created a code of ethics during a media ethics workshop co-sponsored by the International Center for Journalists and Turkish media group Medya Dernegi.

We wrote to Sherry Ricchiardi, who spoke during the workshop, asking more about the program.  Ricchiardi is also an associate professor of journalism at Indiana University School of Journalism.

According to Ricchiardi, who has “long worked with ICFJ on journalism projects on issues ranging from media ethics to investigative journalism,” none of the 25 participating journalists paid for the training. The journalists were chosen by ICFJ’s Turkish partners.

The ICFJ’s Turkish partners — but mainly Medya Dernegi — ran online courses which the 25 journalists took prior to the workshop.  “All participants had taken the online courses and hit the ground running when we gathered in Istanbul,” according to Ricchiardi.

Ricchiardi commented about the participants: “I have been doing media training for years, but this was one of the hardest working groups I ever encountered.  They truly saw this as an opportunity to raise the quality of journalism in their country.”

The code of ethics, not available in English yet, focuses on “the usual categories and guiding principles” of journalism according to Ricchiardi.  For example, “find truth and report it, minimize harm, act independently and be accountable.  Categories included conflict of interest, privacy, visual communications, blogging/new media, deception and plagiarism, among others.”

The training included both online ethics courses and the Jan. 25- 27 workshop.  We asked Ricchiardi for more information about the courses. As an example, she wrote that “one of the six-week courses focused on ethics of digital journalism.” The training journalists created “guidelines and ethical decision-making models” to frame issues for the Turkish journalists. Ricchiardi explained:

“We addressed complex issues that arise when journalists use digital platforms to report and publish news.  Participants learned a variety of online skills along with ethical components of each one.  Among questions we addressed:  Do readers on the web deserve the same standards of accuracy and fact-based reporting as newspaper readers?  Or does online journalism need different standards?  What happens to accuracy, verification and attribution when competition becomes a deciding factor?”

Ay explained she is “the world desk editor of Skyturk channel which has been broadcasting news for over seven years in Turkey.  I also produce and present a daily world news bulletin called ‘Dunya Raporu’.”

Ay said she found the workshop via an announcement on Medya Dernegi’s website.  She explained that the six-week online course started in August and involved weekly reading, homework assignments, online debates and more.

The January workshop, with its 25 Turkish participants, was run by Alper Gormus and Sherry Ricchiardi and involved discussing “ethics codes, ethical decision-making models” and creating a code of ethics.

We asked more information about the media environment in Turkey.  Ay responded:

“Journalists have a responsibility to look at all the dimensions of the story but the extreme polarization in Turkey interfere with them.  The media has a moral and social responsibility to not engage itself in politics but we can see that Turkish press is failing to exercise its democratic responsibility.”

“Ethical codes and standards are not being followed in the Turkish media mostly because of commercial pressure and political interference,” Ay wrote, commenting that much of the media is owned by conglomerates that “have consistently used the press as an instrument in the furtherance of their interests.”

“A personal acceptance of democratic principles and a belief in equal rights is essential but may not be enough.  We need guidelines and ideas for thinking through the many dimensions of any ethical dilemma and ethics course was more influential to our decision-making than codes.”

“During the online course and workshop we went beyond discussing codes of ethics and worked with considering how the code can be applied and used in real-life situations.”

“Case studies helped us learn how to use the code, we had the chance to consider the issue needs to be addressed like using anonymous sources, hidden cameras, reporting divisive ethnic issues.  Our instructors addressed our common concerns with discriminatory references in news based on race, religion, sexual orientation, and physical or mental disabilities.  Ethical challenges that we face regarding use of photography was also a new matter for me.”

“In Turkey, journalism is becoming less reliable in the eyes of the general public. Although there have been some positive developments I think there is a long way before Turkish media can reach global standards of ethics.  The outcome of Medya Dernegi and IFJ’s cooperation put the first brick and let’s hope this will not be the last one.”

Yonca Poyraz Dogan, another participant at the workshop, responded to StinkyJournalism’s  e-mail inquiry as well.  Dogan, who has worked for English-language daily newspaper Today’s Zaman since 2007 and isn’t a member of any Turkish media groups, explained that she applied for the workshop because she graduated from “the school of communication in Istanbul in 1991 and there was no mention of ethics in journalism.”

After her 1991 graduation, she noted that she came to the U.S. for post-graduate studies and also took a media ethics course.  “It was the first time that I had realized the great importance of the concept of ethics in journalism. I enjoyed it so much and even today I go back to the textbook and read the case studies there.”

iMediaethics asked Dogan what media ethics issues she learned about in the training.  “As I said, I had taken a full credit media law and ethics course in the United States. In this course, it was challenging to talk about issues specific to Turkey. I found out that I was not alone in thinking that journalism has been hurt very badly by the political/ideological polarization in the country.”

Dogan commented that her concerns about the political polarization in Turkey were brought up by “our Turkish educator, Alper Gormus.”

“He said that the current situation is war-like in the country and the first casualty is journalism – which I agree. He offered that we include a paragraph in our preamble of the ethics code that ‘Our media organization refuses to take sides in current and future likely polarizations.’ And we agreed on that.

“We experience all kinds of media ethics problems in Turkey from invasion of privacy to lack of will to seek the truth. One of the biggest problems is in the ownership of the media. There is almost no independence since newspaper and televisions stations are in the hands of businesspeople who seek profitable contracts from the government.”

iMediaEthics wrote to Medya Dernegi for more information.  Deniz Ergürel, the media group’s general secretary, responded explaining that the group is a non-profit with the goal to “promote higher ethical standards on journalism activities.”

“Instead of criticizing the bad examples we are more into promoting the good journalistic practices. We believe in the power of using a positive language when dealing with complex issues. I believe that this course is a very hopeful start in order to support better ethical practices in Turkish journalism. “

The group was created in March 2010 by “some editors-in-chief of Turkish media outlets.”  According to Ergürel, Medya Dernegi’s members “are the representatives of private media companies and our activities are funded by them by the annual fees. Our main areas of activity are educational programs for journalists, media ethics and press freedom issues.”

We asked for more information about the partnership with the IFJ to host the media workshop.  Ergürel responded:

“With ICFJ we offered a 6 weeks online course on ‘Media Ethics’ and a 6 weeks online course on ‘Digital Journalism Ethics’. A total of 80 young Turkish journalists from the print, online and broadcast media have attended these online courses. Among these 80 journalists we selected the best 25 and invited them for a 3 day workshop with Sherry Ricchiardi and Frank Folwell from USA and Alper Görmüþ from Turkey. The aim of this workshop was to prepare an ethics code for journalists in Turkey. Once we have the final redaction by Sherry, Frank and Alper we will announce these codes by press releases and will do some additional work to promote them in the Turkish media. I’ll make sure that you have the new codes as soon as we announce them to public. If you don’t mind I can add you to our mailing list as well…

“This whole course was a very new concept for us…Many journalists from different media companies have attended these courses including some local journalists from the remote areas of Turkey. During these courses the trainees discussed very important issues of the journalism ethics and tried to find the best solutions for general problems. This was very important for us because in the ‘Medya Derneði’ we believe that diversity and the freedom of speech are vital for a healthy society and a healthy democracy. Thus, I believe that the whole course including the 3 day workshop had a very positive effect on the trainees and it was a very good experience for us as a newly formed non-profit journalism organization in Turkey.”

iMediaEthics asked Ergürel for more information about the media environment in Turkey.  He wrote:

“In the recent years the media industry in Turkey has developed a lot but the media ethics situation in Turkey stays complicated. This is mainly because there is no written media ethics code on journalism that has been accepted and followed by all media outlets. Some media outlets have created their own ethical guides but the number of these examples are very low. Media outlets follow un-written codes and try to reflect the common sense on ethical issues. But as you may imagine this sometimes doesn’t work at all.”