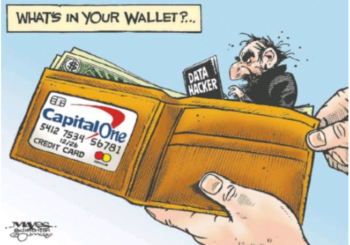 The cartoon in question

Earlier this summer, the Edmonton Journal published an editorial cartoon that was considered anti-Semitic. Now, the Journal is apologizing for the Aug. 1 cartoon that featured “resemblance to anti-Semitic tropes.”

The cartoon, drawn by Malcolm Mayes, was a reaction to the Capital One data breach. It showed someone opening a wallet with a Capital One credit card and a man in all black typing at a computer labeled “data hacker.” The man has a large hooked nose, beard and bushy eyebrows.

iMediaEthics has written to the Journal and Mayes.

The Jewish Federation of Edmonton’s president Steven Shafir complained to the Journal, writing, according to Canadian Jewish News that: “We are disgusted with Mr. Mayes’s cartoon, with your tacit approval of it in your willingness to publish it, or, alternatively, we are astonished by your willful blindness if you did not see the harm that this cartoon would cause.”

“Last week, on Aug. 1, the Edmonton Journal ran an editorial cartoon depicting a shadowy figure in a wallet next to the words “Data hacker” in relation to the breach of customer information at Capital One.

“It has since been pointed out that the image of the person bears resemblance to anti-Semitic tropes prevalent in some anti-Jewish propaganda. This resemblance was entirely unintentional, but given that association, the Edmonton Journal apologizes for the publication of the cartoon.

“We are re-examining the procedures we have in place to vet editorial content to avoid future such occurrences.”