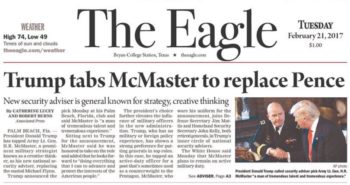 The Bryan-College Station Eagle, a daily newspaper in Texas, published a story with a faulty headline that said Lt. Gen. H.R. McMaster was chosen to replace Vice President Mike Pence.

Readers accused the paper of publishing “fake news,” but it really was just human error on display, the newspaper’s editor Kelly Brown told iMediaEthics by e-mail.

The paper has received dozens of phone calls and e-mails, Brown told iMediaEthics.

The Eagle is a Berkshire Hathaway-owned newspaper in Bryan, Texas, with a circulation of about 22,000, according to Mondo Times. 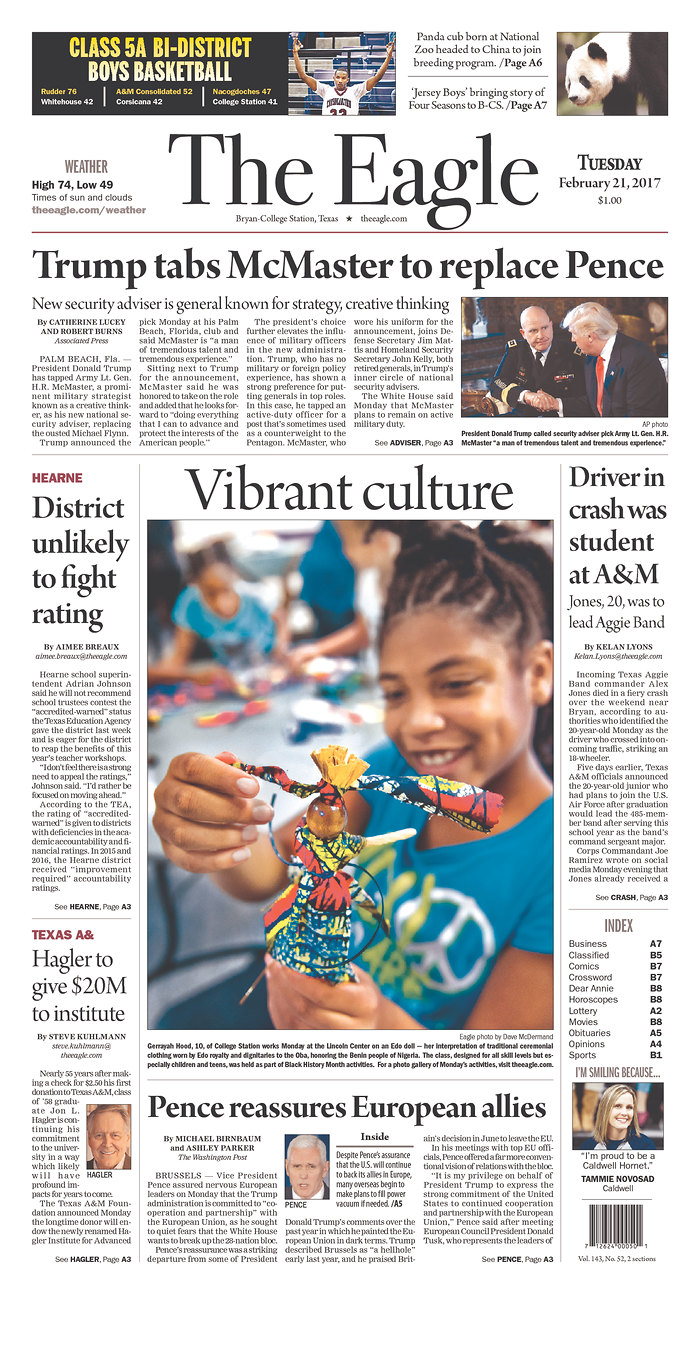 The Eagle‘s front page . Click to enlarge. (Credit: The Eagle/Newseum)

“The criticism has been fairly hostile and jumps directly to the ‘fake news’ or false accusation of being the bias liberal media,” Brown told iMediaEthics. “A few have been simply critical, as in ‘how can you be so stupid?’ Several demanded we fire the copy editor responsible; one contacted the CEO of BH Media (our owners) in Nebraska.”

In her e-mail to iMediaEthics, Brown explained it was an error made by a copy editor who wrote the headline.

“The Eagle’s mistake was not a deliberate untruth or an alternative truth,” she wrote in an apology on the Eagle’s website. “It was an error made on deadline without enough back-up to catch the oversight. That falls on me.”

More specifically, the newspaper is short staffed for its “rover” position (which helps out on the copy desk and with other work around the newsroom). Only one copy editor  — the one who made the error — saw the headline that made it into print. That copy editor was the only copy editor working that night and since another editor was out for family reasons, the mistake slipped through.

To prevent future editing errors, Brown said the paper now will require the headlines on every page be checked by “at least three people.” The paper is currently short an editor, so that “means longer days for the managing editor and myself.”

“The solution for now, we hope, means more work for management rather than burden already overworked staffers,” Brown e-mailed iMediaEthics.

My mom sent me this photo of the front pager of their hometown paper can you spot what’s wrong (hint: it’s more than one thing) pic.twitter.com/6mITkwzQWH

In a lengthy apology on its website, the Eagle’s editor Brown conceded, “There’s no good excuse at all for serving this to our readers.”

Some readers have responded with support for the newspaper, Brown told iMediaEthics by e-mail.

“Strangers, sources, friends and colleagues from across the country sent me emails or texts of support,” she added. “In general, the notes suggested taking responsibility and apologizing added to our credibility.”

In her apology on the Eagle’s website, Brown promised the paper “will do better” by putting “more eyes on every story, every cutline, every photo, every headline” and offered to discuss the mistake with any reader who wanted.