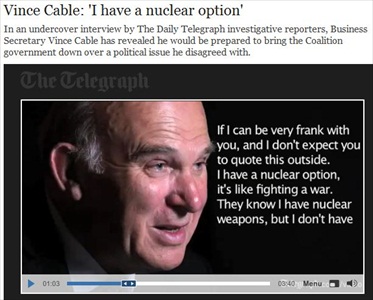 The Telegraph published an audio recording with transcript of the controversial comments--even though a clear request for privacy was made during the meeting. See above, a screenshot from Vince Cable's recorded comments. (Credit: The Telegraph)

The Daily Telegraph published a series of exposes based on undercover reporting this week.

Telegraph reporters posed as mothers seeking advice during private meetings with several members of the British Parliament (MPs).  They recorded several MPs making controversial comments during these “surgeries.” (The Oxford Dictionaries defines “surgeries” as “an occasion on which an MP, lawyer, or other professional person gives advice.”).

The Guardian reported, “The Telegraph’s secret taping of Cable and fellow Liberal Democrat ministers while pretending to be concerned constituents has raised eyebrows in some media quarters, but the newspaper has claimed a ‘clear public interest’ defence for its actions.

The Guardian noted that the Telegraph recorded Vince Cable, Scottish secretary Michael Moore, business minister Ed Davey and pensions minister Steve Webb. The recording of Vince Cable stands out as his comments led to his removal as head of media policy.

Cable was quoted by the Telegraph as saying (emphasis ours):

“Can I be very frank with you, and I am not expecting you to quote this outside. I have a nuclear option, it’s like fighting a war. They know I have nuclear weapons, but I don’t have any conventional weapons. If they push me too far then I can walk out of the government and bring the government down and they know that. So it is a question of how you use that intelligently without getting involved in a war that destroys all of us.”

Cable reportedly “declared war” on Rupert Murdoch.  That comment was “held back by the Telegraph but later leaked to the BBC.”

The Guardian noted that Cable “was stripped of the responsibility for media and telecoms” after those comments were leaked.  Jeremy Hunt, the secretary of state for culture, media and sport, assumed Cable’s position in charge of media policy.

News Corp. is in negotiations to buy the company, which Bloomberg describes as “the U.K.’s biggest pay-TV company.”

One of News Corp.’s U.K. publications, News of the World, was criticized this summer for its own undercover reporting expose. News of the World caught on camera the Duchess of York, Sarah Ferguson, accepting money in exchange for promised access to her ex-husband.

Cable’s Reaction to the Expose

Cable commented on the expose in the Richmond and Twickenham Times Dec. 23.  (See full article here.)

In the Richmond and Twickenham Times article, Cable claimed the expose resulted in “‘great damage’ to the confidential relationship between MPs and constituents” and that moving forward, he would be “more guarded.”

“I feel quite angry and strongly about this, I’ve had constituency surgeries now for 13 years every week, that’s well over 600.   Thousands and thousands of constituents have been to see me, often on very difficult and highly confidential issues which have been respected by me and by them.

“Then somebody who isn’t a constituent falsifies their name and address and comes in with a hidden microphone – it completely undermines the whole basis on which you operate as a local MP.

“All my colleagues, of all parties, feel very strongly that some great damage has been done by this.”

Cable stated that he has no intentions of leaving his post as a result of this incident.

“Sometimes you have to try to give people frank comments and advice, and in this particular case I did preface what I was saying by saying if they want to have a conversation about a political matter as well as a personal matter it is confidential, and you do expect people to behave in a trustworthy way, which these people from the Daily Telegraph didn’t.

“Obviously one will have to be more guarded, but the problem is you need to give people an honest answer when they ask a question. Again it diminishes our role.”

See here the transcript and audio recording of Cable’s remarks.

The UK Press Complaints Commission, which handles complaints from the public about the media, reportedly told the BBC that it had received more than 20 complaints about the secret recordings. The PCC noted that the ministers recorded didn’t file any complaints.

The Telegraph defended the reporting as in the public interest.

“There is a clear public interest in The Daily Telegraph publishing this story,” a spokesperson for the Telegraph’s parent company, Telegraph Media Group, is quoted as saying.

“The Daily Telegraph takes the Press Complaints Commission code extremely seriously and has always adhered to it.”

Care Minister, Paul Burstow, was caught on tape telling the Telegraph reporters not to trust prime minister David Cameron.  Burstow stated: “I don’t want you to trust David Cameron… in the sense that you believe he’s suddenly become a cuddly Liberal. Well, he hasn’t.”

Burstow has apologized for his comment and said they “embarrassed him,” the BBC reported. As the Telegraph noted, Burstow also stated that Cameron “has my full trust.”

Was the Undercover Reporting Ethical?

Further, Cosgrove claimed that the undercover reporting by the Telegraph shows that “Britain’s press has forgotten its code of ethics and decency.”  He explained that the MP surgeries don’t work without privacy and confidentiality.  While Cosgrove acknowledged that Cable’s comments were “recklessly indiscreet” and “farcical bragging.”

“What the Telegraph did here is not an example of investigative journalism.  It is no more than gutter-press entrapment, and it is being used so abusively and extensively by the British press that it is becoming a threat to the rules and conventions which link public figures to the press, and it will only add to the climate of destructive mutual distrust which is seeping into their relations.”

The Guardian’s Maggie Brown questioned the ethics of the undercover reporting with the caveat that “journalists should not use subterfuge, snooping, false identities, undercover filming or deceit as a regular tool in their daily work.”

As Brown laid it out in her column, only in dire circumstances — such as “Drug dealing, arms dealing, people trafficking , fraud, corruption, exploitation and the misuse of public office for personal gain” — should undercover reporting be used.

Brown explained that the expose shows Cable to be “unprofessional, not suited to the gravity of high office,” so ultimately, the Telegraph “has performed a service in the public interest.”

Reuters reported that “journalism academics criticised the tactic;” however, Reuters only cited one journalist as being critical, Sheffield University journalism professor Martin Conboy as saying “There’s almost a mutual self-destruct compact between news media and politicians, where the losers are the public.”

Meanwhile, the Guardian’s Roy Greenslade did cite several journalists critical of the undercover reporting — including Conboy.

For his own part, Greenslade found that the controversial comments — specifically Cable’s on Murdoch –couldn’t have been made without undercover reporting and that Cable was “foolish.”

We are writing the various MP’s offices for comment.