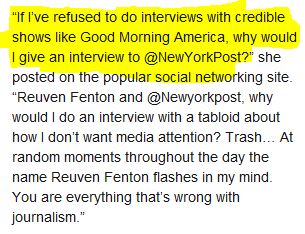 Gennette Cordova is the college student who received a “lewd photo” from Rep. Anthony Weiner’s Twitter account.  While she has avoided interviews and commenting on the incident, outside of her statement, the New York Post recently published an “exclusive interview” with Cordova — one which she says was obtained without her knowledge, the Washington Post reported.

According to the Washington Post, Cordova has turned down interviews but will tweet to “clarify” some comments made by the media about her.

But, she claims the New York Post tricked her into the interview because she didn’t know she was being interviewed. Cordova tweeted claiming that Post reporter Reuven Fenton “posed as a photog assistant.”  She also called it an “invasion of privacy” to get the “interview” when she was “candidly” speaking.

According to the Washington Post, Fenton is accused of having “tagged along on what Cordova thought was a student photo shoot and casually chatted her up while a photographer snapped away.”

She tweeted: “I was ‘Trojan horsed’ by an NY Post reporter who never said who he was or that he was interviewing me.”  She claimed the Post “surreptitiously” turned a conversation with her into an interview and took her “quotes out of context.”

The NYPost’s article claimed the information was obtained “during an exclusive photo shoot and interview.”  Notably, the final quote the Post published had Cordova saying she wants her “privacy back.”

Cordova also claimed that some of the comments she reportedly told the New York Post were prompted by Fenton.

She’s also tweeted that Fenton is  “everything that’s wrong with journalism” and that the New York Post should follow the SPJ Code of Ethics.  Specifically from that code, journalists are advised to “avoid undercover or other surreptitious methods of gathering information except when traditional open methods will not yield information vital to the public. Use of such methods should be explained as part of the story.”

POLITICO re-reported the claims, according to the Washington Post. Both the New York Post and Politico reportedly have backed their stories. Regarding POLITICO’s article, she questioned why it’s “news” and “did my quote warrant that headline?”  POLITICO reported on Cordova’s criticism of the New York Post article and mentioned that POLITICO did write a “short item about the New York Post’s ‘interview.'”

But, POLITICO defended its “short item” by noting it was “very clearly sourced” to the New York Post and “contextualized other developments swirling around the embattled congressman.”

On May 30, Cordova tweeted about the media storm: “This is teaching me an invaluable lesson about the importance of journalistic ethics and standards.”