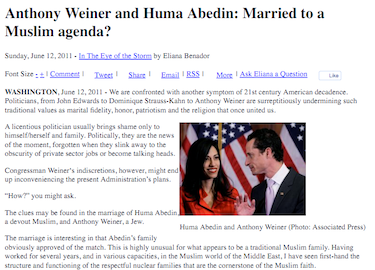 The Washington Times removed a June 12 column by conservative blogger Eliana Benador, in which Benador alleged that Rep. Anthony Weiner and Huma Abedin’s marriage is a cover for a political agenda, the Huffington Post reported.  The article accused Abedin of marrying Weiner in order to advance her own “socialist” and “Muslim” political agenda.  See a PDF of the article on the Huffington Post’s website here.

The post appeared in the Washington Times’ Communities, an online forum that contains columns from independent writers. Benador’s column, “In The Eye of the Storm,” is described in the Communities’ directory as “political analysis and commentary on national, international and Muslim affairs.”

The Washington Times removed the post from its website “due to its use of unsubstantiated claims,” Communities editor Jacquie Kubin told iMediaEthics via email.  Kubin did not respond to iMediaEthics further requests for comment on the Washington Times’ unpublishing policy.   A June 13 Salon blog post reported that Kubin said the piece is currently “under review.”

A note on Benador’s page states that the Washington Times does not edit contributors’ material to the Communities.

The Washington Times is a daily newspaper in Washington D.C. that is owned by a group led by Sun Myung Moon and is known for its conservative political views.