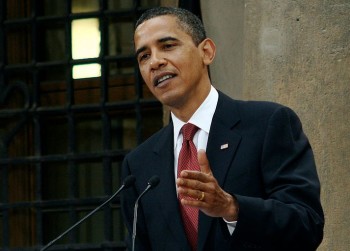 Barack Obama in 2009. The Toronto Star's public editor addressed the Star's decision regarding spelling out the n-word after Obama used the word in a recent interview (Credit: Wikipedia)

It would have been OK for news outlets to spell out the n-word when reporting last week on President Barack Obama’s use of the word in an interview, Toronto Star public editor Kathy English argued June 26.

Obama said in a radio interview with Marc Maron that “Racism, we are not cured of it. And it’s not just a matter of it not being polite to say nigger in public. That’s not the measure of whether racism still exists or not.”

“By any definition of ‘what is news’ Obama’s use of the n-word was newsworthy,” English wrote, noting that the n-word is “a taboo word rarely used in media.”

In reporting on Obama’s comments, the Star used “n-word” or “n—-r” instead of spelling it out, at first, according to English.  But, the Star went back and spelled the word. “Later in the day, following considerable discussion, the newsroom decided to use the full direct quote — without dashes in the word — in the next day’s newspaper story,” she wrote, noting it wasn’t in the headline and only used one time in the story.

But “was such euphemism necessary here?” she asked. “To my mind, this was no time for the Star to play coy. When the president uses that loaded word, in the context of talking about persistent racism in America, there is no need to bleep out, dash out or otherwise obfuscate the word — as offensive and ugly as it indeed is.”

In fact, English reported that the Star has only used the full word “some 76 times” in the past decade “largely in quoting others within stories about racism, and never gratuitously.” That fits with Star’s policy only permitting “racially pejorative terms” “sparingly and only in direct quotation,” English wrote.

“We felt it was appropriate given that it was being said by the president of the United States and that its use was highly pertinent to the message itself.”