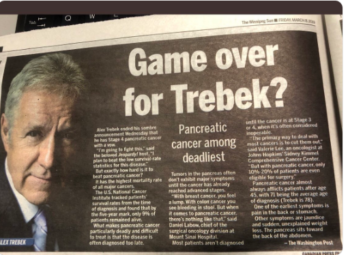 The Winnipeg Sun offended readers with an insensitive headline about Jeopardy! host Alex Trebek, who recently announced his pancreatic cancer diagnosis. The headline in print read, “Game over for Trebek? Pancreatic cancer among deadliest.”

In a March 10 apology, the Sun wrote:

“The Winnipeg Sun apologizes to Alex Trebek, his family and fans for an insensitive and highly inappropriate headline published in Thursday’s paper. We wish Mr. Trebek all the best in his fight against pancreatic cancer.”

iMediaEthics has written to the Sun to ask how many complaints it received, if Trebek’s representatives complained, and how the headline made it to publication.