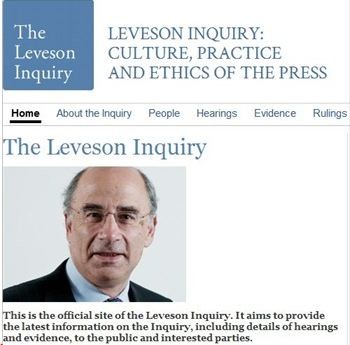 A UK investigation into “the culture, practice and ethics of the press” started yesterday. Called the Leveson Inquiry, after its chair Lord Justice Leveson, it will focus on “unlawful and unethical” practices in the media and not just phone hacking, according to the Guardian.

The Telegraph noted that “the inquiry was set up by Prime Minister David Cameron in July after revelations that a private detective working for News of the World hacked the phone of murdered schoolgirl Milly Dowler.”

According to the Guardian, it was revealed that former News of the World private investigator Glenn Mulcaire had “the names of 28 News International employees” in his notes.  Mulcaire was arrested and jailed for phone hacking in 2007.

Attorney Robert Jay explained that “The inquiry is beginning to receive evidence to indicate that phone hacking was not limited to that organisation [News International],” the Guardian reported. Further, Jay said that Mulcaire’s notes mention the UK Sun – and not just News of the World. Journalism.co.uk noted that the UK Daily Mirror also “may have commissioned work by” Mulcaire according to Jay’s comments at the hearing.  (The Mirror has responded that it “has no knowledge of ever using Glenn Mulcaire.”)

This would disprove News International’s claims that Mulcaire and former News of the World reporter Clive Goodman were the only ones who engaged in phone hacking.  However, News International questioned the claim that 28 News of the World staff members used Mulcaire for phone hacking. The company’s lawyer commented Nov. 15 that he “would like to have this information checked,” according to the Guardian.

According to the Guardian, Jay said Mulcaire’s records indicate that “Mulcaire received a total of 2,266 requests from News International journalists…2,142 of which were made by four unnamed reporters.” One of those four unnamed reporters made 1,453 requests.  Also, in 2006, the police found in Mulcaire’s office recordings from 64 people’s voicemails and the names of almost 5,800 people.

Journalism.co.uk noted that “The names found among Mulcaire’s notes do not necessarily indicate involvement in illegal practices: the private investigator was also commissioned to do legal work such as ‘blagging’ – obtaining information though deception.”

During yesterday’s Leveson hearing, Jay disclosed that Mulcaire may have started hacking phones earlier than thought — in May 2001.

According to the Telegraph, there will be two parts to the inquiry: first, a set of testimonies by phone hacking victims and journalists and second, a close look at phone hacking.

The Leveson Inquiry set up a website collecting information about the inquiry, its hearings and its evidence here.