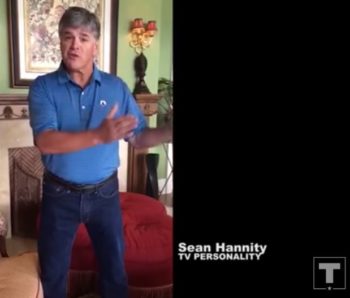 Three August episodes of Sean Hannity’s program on Fox News were biased in their coverage of the U.S. election, the UK broadcast regulator OfCom ruled this month.

Fox News denied being pro-Republican and that the episodes were pro-Donald Trump. (Although, iMediaEthics notes, Hannity himself publicly supported Trump, even appearing in an ad for him.)

The first episode in question, Aug. 2, devoted about “a third” of its time to Hannity interviewing Trump. Altogether the three episodes “included a number of highly critical statements” about Clinton including Trump calling her refugee plan “insane,” claims she lied, that she was “the queen of corruption” and “reckless and crooked,” allegations she was “only work[ing] for her donors, special interests, and lobbyists,” and more, OfCom reported.

In addition, OfCom noted that the three episodes “include various statements that could be described as supporting the policies of Donald Trump,” such as Trump being allowed “to make a number of unchallenged statements about his policies,” and Hannity listing  claims about what Trump would do positively if elected.

Fox News defended the episodes as “analysis of and commentary on domestic and international news and political developments and commonly feature guests and panels.” Fox News argued the episodes weren’t in breach because they were “commentary shows, and not news programmes” featuring opinion and perspective. Fox News also commented that Fox News had previously asked Clinton or her representatives to appear on the show. OfCom disagreed with Fox News that it used clips or Clinton’s previous statements to present her view. “In our view the few video clips of Hillary Clinton featured in the programmes were used only in a manner to criticise her and her candidacy,” OfCom ruled.

As such, OfCom found that Fox News didn’t offer Clinton’s perspective with “due weight.” OfCom explained, “This was because the views expressed by Hillary Clinton were being dismissed and denigrated in a manner so as to support the viewpoints of, for example, the presenter Sean Hannity and guest presenter, Mike Huckabee, which were clearly highly critical of Hillary Clinton.” In addition, OfCom commented that “any criticism of Donald Trump was mild by comparison,” and there were “no criticisms of Donald Trump’s policies, actions or integrity analogous to criticisms in the same areas made about Hillary Clinton.”

After looking at the transcripts for the programs, OfCom said, “We considered that the programmes presented an overwhelmingly one-sided view (in support of Donald Trump) on a matter of major political controversy and major matter relating to current public policy.” OfCom noted that “there was no unanimous support expressed for Donald Trump and his campaign” but “there was a high degree of unanimity in the viewpoints expressed within the programs, and overwhelmingly support was given to” Trump.

OfCom noted that its guidelines for “due impartiality” don’t require programs to give literally equal time for different views, but programs just must make sure there is “adequate or appropriate” time given. OfCom flagged the problems “during routine monitoring” of broadcasts.