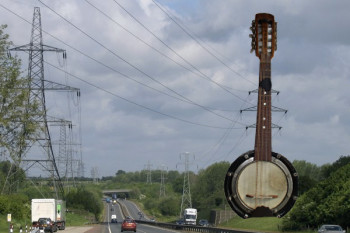 A huge banjo sculpture will not be looming over the A47 Southern Bypass in Norwich, UK. (Photo Illustration by London Shearer Allen; Credits: Graham Hardy via Geograph and Arent via Wikipedia)

“On a light and funny story we were hoaxed by a normally reliable source,” Eastern Daily Press business editor Shaun Lowthorpe told Hold the Front Page. He noted that “our defences were down” against April Fool’s Day jokes and the paper is “apologising to our readers.”

The Great British Banjo Company was behind the press release, according to Hold the Front Page.

The banjo company is based in Norwich and makes “a small collection of banjos.”

The company’s managing director Simon Middleton told iMediaEthics by e-mail he sent the press release to the newspaper on April 1 and didn’t hear anything from the newspaper “until it appeared in print 8 days later.”

Middleton told iMediaEthics that the company posted the “spoof” release on its Facebook and Twitter accounts on April 1st in the morning. “Our audience enjoyed the gag,” he wrote. “Nobody was taken in by it.”

“We sent it to the EDP as an afterthought because they know us well and we thought they’d enjoy the gag too and might even run a short ‘funny’ about our story,” he said, noting that the paper published its own April Fool’s story about the Loch Ness Monster.

“We thought it was harmless fun,” he told iMediaEthics. “We of course regret any embarrassment caused to the paper and I have apologised to the business editor and the journalist.”

Middleton pointed out red flags with his press release that he thought would clue the paper in to the prank.

“We wrote it with plenty of clues that it was a spoof,” he wrote. “Indicating that two world famous sculptors were involved! Indicating that it was 50 metres tall and would ‘redefine’ the city skyline and be visible from 5 miles away! And our double entendre in the closing sentence. All would indicate to most people the absurdity of the story.”

But, on April 8, the Eastern Daily Press published the story on its front page of its business supplement.

The story was published in print and apparently online briefly, according to Middleton’s comments to Hold the Front Page. He said he received an “internet alert” about the story being published but “when I clicked through, the link didn’t work.”

iMediaEthics has written to the Eastern Daily Press to ask for comment and will update with any response.