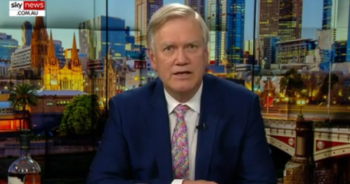 Australian Sky News commentator Andrew Bolt apologized after saying Peter Kehoe, a school athletics coach, “hit on” a 15-year-old boy. In reality, Kehoe was convicted of grooming the boy back in 2015.

His comment was in the context of his show’s segment on a Four Corners report on St. Kevin’s college and the coach in question.

Bolt said on Feb. 18 that a convicted sexual offender “hit on a boy, no sex occurred.”

The boy, Paris Street, posted on Facebook about the segment, slamming Bolt and Henderson’s comments. “To have what I was subjected to trivialized…is inconsiderate.”

“If you displayed any sympathy towards me, you wouldn’t be minimising what was inflicted upon me,” he added.

Bolt apologized two days later on air. Sky News published the apology on its website, and said he was angry at the way people reported on his comments.

According to the Guardian, his guest Gerard Henderson apologized for “upsetting” Street, adding: “By way of background, the fact is that my comments essentially were directed at Louise Milligan’s Four Corners program Boys Club and I made little reference to Paris Street in response to the questions I received.”

iMediaEthics has written to Street and Sky News.

Edmonton Journal: Capital One hack cartoon had 'resemblence to anti-Semitic tropes'
Why CBC says documentary on Trial co-produced by lawyer's daughter not conflict of interest