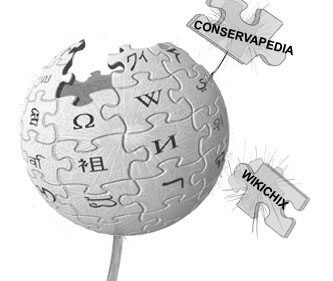 Wikipedia, which in January became one of the top-10 most visited sites on the Internet, has been under heavy fire as a not-so-authoritative source. From the ban on Wikipedia as a quotable source of information at some universities and newspapers, to the expose of a prominent Wiki editor as a fraud, Wikipedia has been in the news–whether it wants to be or not. As if this were not enough, special interest groups have now declared war on Wiki, spawning their own wiki alternatives as a cure to what they perceive as widespread Wikipedia bias.

Is the encyclopedia that “anyone can edit” biased, despite its open format? If the latest crop from the wiki farms is any indication, the answer is yes. Like dandelion seeds in the wind, Conservapedia and WikiChix have sprouted sporting the same programming DNA as Wikipedia. If you don’t look carefully, you may not realize you’ve left the Wikipedia site.

Competing sites like Conservapedia and WikiChix use Wikipedia’s programming features and interactivity to advance their own narrow viewpoints, even though these very features were designed as checks and balances to guard against bias. Andrew Schlafly, son of famous conservative Phyllis Schlafly, recently launched Conservapedia as an alternative to Wikipedia in November 2006. His rationale: Wikipedia is “Anti-American, and Anti-Christian.”

But are Conservapedia’s writers, themselves, adhering to the Conservapedia Commandments? Seems not. After attempting to verify Conservapedia’s accusations of bias against Wikipedia, many of its basic charges turn out to be false or exaggerated.

One prime example is its article on abortion, in which Conservapedia accuses Wikipedia of “denying and omitting the results of 16 out of 17 statistically significant studies showing increased risk of breast cancer from abortion.”

If you look at Wikipedia’s article on abortion, however, you’ll see that it does mention the correlation between breast cancer and abortions. Wikipedia also has a separate article dedicated to the topic filled with statistics. The “breast cancer-abortion correlation” article is, in fact, more detailed than the Conservapedia article on abortion, and provides perspectives from both sides of the social spectrum.

Another omission of detail: Conservapedia says that “abortion is a billion-dollar industry in the United States and Western Europe except for Ireland, Malta, Poland and Portugal, where it is generally illegal.” Unlike the Wikipedia entry, however, the Conservapedia article fails to mention that abortion is also illegal in Spain, with exceptions for extenuating circumstances (rape, incest, etc…)

Unlike Wikipedia, the Conservapedia article also fails to mention the negative social problems from abortion, which would bolster the conservative stand on abortion. In countries such as India and China, for example, where abortions are legal, there is a statistical trend for more males than females. Many sociologists attribute this phenomenon to practices in each culture (such as the girl’s family paying a dowry in India, and the general preference for boys in China from the one-child policy). While there is a debate over these charges, their mention would certainly bolster Conservapedia’s entry on abortion.

Because of its thoroughness and inclusiveness, it seems, Wikipedia offers a more comprehensive view of the conservative stance on abortion than Conservapedia does.

On the other end of the political spectrum is WikiChix. WikiChix started when some female members left Wikipedia and formed their own wiki. One of the main issues that triggered the creation of WikiChix was the “feminist in science fiction” article on Wikipedia, later revised to “women in science fiction.” In response to this and other claims (such as women feeling intimidated on the talk pages), WikiChix said that Wikipedia was rife with anti-feminist bias.

WikiChix, like Conservapedia, has its own article on its site explaining systemic bias in Wikipedia, only this time against women in general. Unfortunately, you can’t view the article on gender bias unless you are a member. In order to get a login account you have to state if you are a female or not. (It’s strange that a site that complains about gender bias would use gender as a screening tool for potential members.)

Wikipedia is not a perfect reference tool by any means, but when compared to standard encyclopedias it has held up to scrutiny surprisingly well–especially its science entries. According to a recent study published in Nature, “the average science entry in Wikipedia contained around four inaccuracies; Britannica, about three.”

Wikifarms continue to spring up. Some are used to organize company databases, while others are used to promote niche hobbies and lifestyles. But if there is a frontier beyond wiki it seems to be the world of streaming internet video and You Tube. Not surprisingly, Christian outlets have made their initial foray with God Tube.