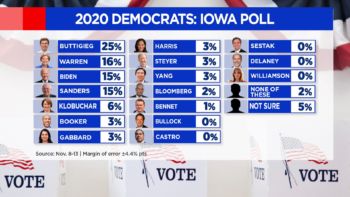 MSNBC did not include Democratic presidential candidate Andrew Yang in a graphic about the Iowa caucus.

“Earlier on UP, we aired a poll graphic that inadvertently left off @AndrewYang. This was a mistake that we’ve since corrected on air. We apologize to Mr. Yang,” MSNBC wrote on Twitter.

In an on-air segment, MSNBC noted that it left out Yang in an earlier graphic.

iMediaEthics wrote to Yang’s campaign. We also contacted MSNBC to ask how the error occurred and what the on-air correction stated. MSNBC declined to comment on the record.