After Denial, Australian Man Admits to Impersonating a Reporter 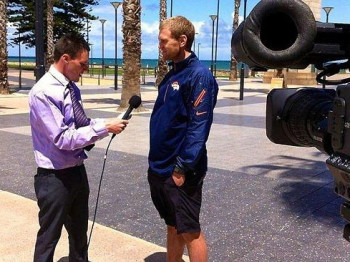 Kane Hicks during his interview with Kane Cornes. (Via Adelaidenow.com.au)

iMediaEthics wrote about an Australian man accused of posing as a Sky News reporter and interviewing the professional soccer player Kane Cornes a few months ago.

We later heard from the person at the center of the story, a South Adelaide man named Kane Hicks. He complained by email that the media–including iMediaEthics– wrote reports misrepresenting him.

Hicks accused us and others of defamation and demanded that we unpublish the article.

During our review of the issues that Hicks raised, we unearthed a very interesting backstory, and discovered that Hicks confessed, that yes, he did, in fact, pretend to be a Sky News reporter. He said his impersonation was in order to impress his partner.

We wrote the story after seeing multiple news reports, including the Australian Advertiser‘s article featuring Hicks being accused of posing as a Sky News reporter.

A Sky News spokesperson confirmed with iMediaEthics at the time that the report was true:

“SKY NEWS were alerted to Mr Hicks impersonation of a SKY NEWS staff member when contacted by a concerned member of the public last week. We acted immediately and notified the South Australian police who are now investigating.”

As part of the reporting on our initial story, iMediaEthics contacted the South Australian Courts Feb 25 asking about charges against Hicks related to the Sky News impersonation. We also asked what the consequences might be if the charges went beyond the faking of identification.

Hicks e-mailed iMediaEthics March 19 to complain about our story.

In Hicks’ email to iMediaEthics, he said:

“The real story is nothing along the statements you have wrote in your article nor does your article hold any truth, regardless of where you got your sources!”

We asked Hicks for specific facts in our story that he believes to be false so we could investigate further.

“Your article is containing information that’s misleading, non existent and creates speculation and defaming remarks on many levels to which I take offence to,” he wrote in his email.

iMediaEthics created a list of five key questions for our review of Hicks’ claims:

Here again, are the five key questions addressing issues that Hicks raised, along with what we found.

The key premise of our reporting on Hicks was the accusation he impersonated a Sky News reporter.

Weeks after Hicks’ email to iMediaEthics and during iMediaEthics’ investigation of his story, things took an interesting turn.

Hicks admitted in an interview with an Australian newspaper that, in fact, he did pose as a Sky News reporter.

Hicks did an interview with the Sunday Mail, the Advertiser’s sister newspaper, admitting to posing as a Sky News reporter, using Sky News Australia logos on his car and renting equipment to further the ruse.

Below, see the headline in the Advertiser.

An April 6 article in the Advertiser reported that Hicks “approached the Sunday Mail to tell his story” and that Hicks said he “posed as a Sky News reporter to keep his gay partner proud – but, above all, a part of his life.”

“Time goes on and I tell my partner that I got a job with Sky News Australia ­– the only problem is that there is nothing I can show for this and my job role,” Hicks told the Mail. “I went in to panic mode.

“I placed logos of Sky News Australia on a car and drove it as if it was a company news car. I know now that was wrong of me to do and my actions caused me nothing but further heartache.”

The Advertiser reported that the mother of Hicks’ partner was the person who tipped off Sky News to his impersonations.

2. Was soccer player Kane Cornes duped in the process?  (NO, the Australian Advertiser and Sky News Australia were in error).

Based on Australian news reports, MediaEthics reported that Hicks duped Kane Cornes in order to interview him. Below, see what we wrote in our original report:

The sources for our report included the Australian Advertiser. Its headline read:

Further bolstering the reports was an article from Sky News Australia itself, which reported:

So iMediaEthics contacted Cornes’ team to ask for confirmation about the interview.

“Kane was approached by Hicks via social media to conduct a mock video interview as Hicks was wanting to gain experience to prepare him to apply for journalism work.

“Kane Cornes at no stage thought he was a reporter for Sky News and Kane Hicks did not try to mislead him in that way.

“It was simply a case of Kane Cornes helping someone out who had approached him to gain some interviewing experience. Very straight forward.”

As a result of all this, our first story’s statement was inaccurate and we have added a correction.

3. Were the South Australian police investigating Hicks?  (NO, but Sky News said they were).

iMediaEthics reported that Sky News said the police were investigating Hicks, which is what we were told. We reported:

We went back and confirmed this with Sky News, which repeated its earlier claims.

So what was going on?

When we spoke with the police, they clarified for iMediaEthics that while Hicks does face dozens of charges, they are for another matter.

Sr. Constable First Class David Muir told iMediaEthics by phone earlier this year where he explained that unless there was evidence that Hicks gained benefit from posing as a reporter, this would not generate any criminal charges.

“Whilst Sky News did actually go to a police station here in South Australia and inform them of what had happened there is no offense that has been committed…There is no legislation that covers impersonating a journalist.”

“Unless he’s obtaining some sort of benefit…he’s not committing any offense,” he explained.

While, “he would be correct in saying we haven’t investigated him” for impersonating a reporter, Muir noted that he is still in a separate matter facing 42 charges of  “Dishonestly Manipulate Machine for Benefit and 2 charges of deception” in a South Australian court.

So what does that Dishonestly Manipulate Machine for Benefit charge mean?

Muir told iMediaEthics it results from when someone uses a machine — like a computer — with dishonest information. For example, “what that means is lets say you were sitting at home on your computer and you had a stolen CC [credit card] and u used that stolen CC to purchase items on the computer or even presented it at a dept store…and they swipe the card through one of those machines, that’s the offense,” he explained.

4. Do the charges against Hicks pose any jail sentence? (YES)

Hicks told iMediaEthics that he wouldn’t have to go to jail if convicted of the charges against him in the courts.

“There is not 42 counts being heard in the courts and all supposed chargers that are listed are summary offences and pose no jail sentence,” he wrote.

However, that appears to be false.

South Australian Courts told iMediaEthics he is facing a total of 44 counts — 42 of dishonest manipulation of machine and the 2 deception charges.

The South Australian Current Acts website clearly states that the dishonest manipulation of machine has “Maximum penalty: Imprisonment for 10 years.”

Hicks disputed that he rented equipment worth thousands of dollars, telling iMediaEthics that he spent $865.50 on renting a Sony DVCAM 570.

But, while he may have spent just shy of a thousand dollars on the rental, the camera itself is worth more than that, of course. To buy the camera costs much more than the rental.  A used version of the same camera was selling on eBay for $2,200 when iMediaEthics checked this spring. Other eBay sales of the same camera, in used condition, are selling for between $1,500 and $2,000.

So What About iMediaEthics Review of Hicks’ Charges Against Us?

Now that Hicks’ admission to posing as a reporter is confirmed, what about the other charges against him?  And where does this leave our review in response to his complaint?

iMediaEthics’ original Feb. 27 story relied on Australian Advertiser and ended up repeating its error, but is otherwise correct, according to our fact checking as cited above.

Our story reported the facts:

iMediaEthics is publishing the following clarification and correction on our original Feb. 27 report on Hicks.

Clarification: For clarification, the 40+ charges against Hicks are not because of his impersonation of a Sky News reporter, but because of other actions. The police were notified of Hicks’ impersonation of a reporter but there are no criminal charges for impersonating a journalist unless you gain some sort of benefit. While Sky News did tell iMediaEthics the police were investigating the accusations of posing as a reporter, the police told us they did not conduct a formal investigation. For more on the case, read iMediaEthics’ in-depth story published here.

And where does this leave Kane Hicks?

iMediaEthics asked Hicks why he contacted the Sunday Mail to come clean about posing as a Sky News journalist.

He said he wanted to clear the air and then rolled out a heap of excuses.

“I chose to speak to the media as there was two things that affected me and my personal life. I was frustrated and annoyed that the media had over stated a matter to suit their own story and were not willing to hear my side of the story. Also the fact that I had lost my partner through the extensive media coverage of this matter and also people trying to get  their 15 seconds of fame. I was losing my partner who I dearly loved and I felt my personal life was being exposed for all the wrong reasons, so I decided to approach the paper and ask them to print a story that will hopefully make people understand why this all become a news story.”

Hicks added that he thinks rather than his own doing, that this case “was very much blown out of proportion” and has “affected my personal life.”

“You only need to google my name to see the damage and horrible things I need to deal with on a daily bases,” he wrote. “I hope at some point some media organisation will want to hear my whole complete story and just how this all started as it has a lot of merit to it and reasons to answers in why certain things happen.”

iMediaEthics notes that the first page of results produced from a Google Search for “Kane Hicks” all relate to him impersonating a reporter, an action which he admits to having done, or online profiles for people named “Kane Hicks.”

UPDATE: 7/15/2014 4:59 PM EST Hicks wrote to iMediaEthics that his lawyer asked to go ahead to trial as they have evidence that “I did not commit those offences.”

Hicks thinks too that “all but two [charges are] likely to be withdrawn as the details surrounding the chargers are not correct and police have agreed with this.”

Even more boldly, Hicks now says, “Police are now investigating the statements that were issues [sic] by the victim as to whether they now hold any truth to the matters in court.”

iMediaEthic asked the South Australian Courts for comment. The court’s Sharon Maloney told us there is a pre-trial conference scheduled for Hicks August 27. She said “Our system does not enable us to see what occurred at the last pre-trial conference so you would need to contact the Police Prosecutor for any further information.”

iMediaEthics has asked the police for comment on Hicks’ claims.

The South Australia Police told us that ” at this time the matter is going through the Pre Trial Conference process.”

After Denial, Australian Man Admits to Impersonating a Reporter