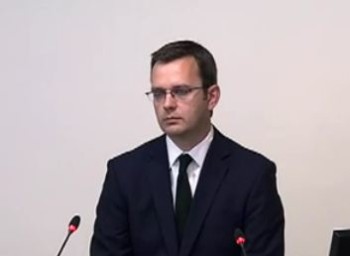 The Scottish police arrested Andy Coulson May 30 for perjury about his role as a newspaper editor in the phone hacking scandal, the New York Times reported.

Coulson, as we have written, was a News of the World editor who resigned in 2007 when former News of the World reporter Clive Goodman was convicted of phone hacking.  Coulson later was hired by UK Prime Minister David Cameron as communications director.  After the phone hacking scandal gained prominence again, and questions about Coulson arose, Coulson resigned in January 2011. Coulson was arrested in July 2011 and “released without charge” for questionining about “phone hacking and corruption.”  Coulson still denies any knowledge of phone hacking.

This most recent arrest relates to a Scottish perjury case related to phone hacking.  Coulson was accused of lying about phone hacking when he was a witness in a 2010 perjury case against Scottish politician Tommy Sheridan.  In that 2006 case, the Los Angeles Times explained, “Sheridan had successfully sued the News of the World for libel over stories of his  adulterous conduct in swinging clubs. Although awarded about $300,000, Sheridan was later convicted of perjury and sentenced to three years in jail.” (See our January 2011 story on Sheridan’s perjury charges here.)

During his 2010 testimony in the perjury trial of Sheridan, Coulson said he “had absolutely no knowledge of” Sheridan’s information being in former News of the World private investigator and phone hacker Glenn Mulcaire’s records or of Sheridan being hacked. He also said “I don’t accept there was a culture of phone hacking at The News of the World” and that Goodman was “a rogue reporter.”  The New York Times noted that the 2010 testimony mirrors Coulson’s other statements about phone hacking.

Coulson’s lawyers said he “will vigorously contest the perjury allegations,” The Guardian reported.

The Sydney Morning Herald noted that the charges against Coulson reflect on the Prime Minister, David Cameron, because Cameron has backed Coulson.  Further, “the question arises whether Mr Cameron had a direct confrontation with Mr Coulson over the stream of allegations, or instead looked at the source of those allegations and rejected them.”