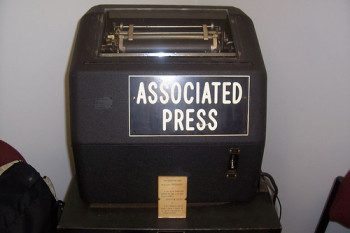 Potter, who now works as a communications director for the Virginia Department of General Services, wants the AP to pay her $950,000 and court costs, accusing the wire service of defaming her when it fired her. She had worked for the AP since 2005.

Potter’s Oct. 14 lawsuit claims “the AP and its executive editor, Kathleen Carroll, defamed her by suggesting that she’d violated the AP’s code of conduct and was unfit to serve as a news editor,” Style Weekly reported.

“Potter says she didn’t violate the AP’s code of conduct because she wasn’t the editor responsible for publishing the erroneous story — Gomlak was, according to her lawsuit,” according to Style Weekly.

Associated Press spokesperson Paul Colford told iMediaEthics by email the AP had no comment on the lawsuit. Potter’s lawyer told us he didn’t have any further comment.

As iMediaEthics reported, the AP fired Potter, along with journalist Bob Lewis and editor Norman Gomlak in Atlanta after the news service wrongly reported that then-candidate for Virginia governor Terry McAuliffe lied to federal investigators.

Potter was the AP News Editor for Virginia and West Virginia.

The AP retracted Lewis’ story and Lewis apologized on Twitter admitting he made the mistake of wrongly assuming that the initials T.M. in court documents referred to McAuliffe.

“Potter trusted that Gomlak and Lewis had the facts right, as was and would be the common, normal, and customary procedure and standard within AP,” the lawsuit states. It adds that “Potter did not attempt any separate and distinct verification of the story that Gomlak and Lewis had prepared for placement ‘on the wire,'” and Potter claims she wouldn’t have to under AP policy.

The lawsuit goes on to claim that the AP’s “Carroll’s later statements to the effect that Potter violated AP’s standards and committeed a grievous error when Potter did not conduct a separate and distinct verification of the story that Lewis and Gomlak had prepared is a knowing lie.”

Potter’s lawsuit also pointed out that the AP didn’t fire anyone for misidentifying the shooter in the Newtown, Connecticut school massacre, but did fire three people related to the McAuliffe error. Therefore, she argued:

“Starting on or about October 10, 2013, Carroll has maliciously published to third parties false and defamatory statements that there were ‘no employees involved in something like’ what Potter was involved with on October 9, 2013, ‘ who did not leave the company.'”

Read the lawsuit below, via Style Weekly.