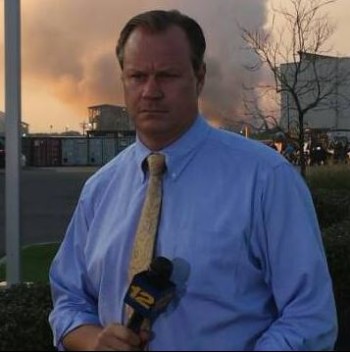 A New Jersey TV reporter was suspended and later quit for claiming the “underlying cause” of the recent murder of a police officer was caused by “young black men growing up without fathers.”

The reporter, Sean Bergin of News 12 New Jersey, reported July 13 on police officer Melvin Santiago’s death.  He said the “anti-cop mentality” “has made the police officer’s job impossible and it has got to stop.”

“The underlying cause of all of this, of course: Young black men growing up without fathers.”

“Unfortunately, no one in the news media has the courage to touch that subject,” he added.

Bergin, a freelancer, later confirmed that he was suspended, the Associated Press reported.

“Sean Bergin says he was suspended from News 12 New Jersey without pay Monday and with pay Tuesday. The contracted employee says he was told his assignments would be cut to one a week,” according to the AP.

He told conservative news site The Blaze that after the suspension, he was effectively given a “demotion.”

“They offered me one day of work a week doing only light features, and no hard news,” Bergin told The Blaze. “It was only about $300-a-week — who can survive on that?”

iMediaEthics received the following statement from a News 12 spokesperson about the incident: “It is News 12’s policy that reporters must be objective and not state personal opinions on-air.  In regards to the particular incident with Sean Bergin, the matter has been addressed internally and we don’t comment on personnel matters.”

Regardless of the reaction, Bergin stood by his comments.

“If I had it to do over again, I would do the exact same thing,” Bergin told the AP. “I broke the rules. I knew I was breaking the rules. But sometimes you have to break the rules to do the right thing.”

He doubled down on his earlier comments telling The Blaze “You can’t fix a problem if you don’t talk about the problem. The truth is, 73 percent of African-American children grow up without fathers. It’s a topic that needs to be handled delicately — and really, this situation could have been used as a way to explore that.”

According to The Blaze, the video clip was not published on News 12’s website. It is available via a YouTube user.

iMediaEthics has reached out to Bergin for further comment.