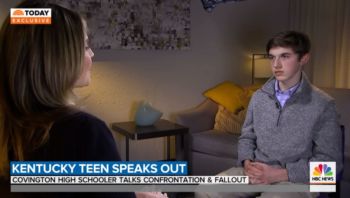 Nicholas Sandmann, the Kentucky teenager from Covington Catholic High School depicted in viral footage and images from the Lincoln Memorial incident earlier this year, is suing a third news outlet for defamation over the coverage of the incident.

Sandmann’s lawyer Lin Wood declined to comment beyond the lawyer, but noted there are “more [cases] to follow.” Sandmann previously has sued the Washington Post and CNN for libel over their reporting on him and the incident, as iMediaEthics has reported.

According to Fox News, “NBCUniversal created a false narrative by portraying the ‘confrontation’ as a ‘hate crime’ committed by Nicholas.” The lawsuit also calls Sandmann “an easy target for NBCUniversal to advance its anti-Trump agenda because he was a 16-year-old white, Catholic student who had attended the Right to Life March that day and was wearing a MAGA cap at the time of the incident which he had purchased earlier in the day as a souvenir.”