Aretha Franklin lawyer on fake story: It's 'Garbage' Not News 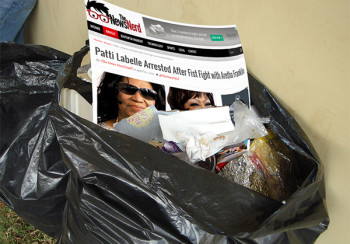 Aretha Franklin, 72, is exploring suing TheNewsNerd.com after the site published a satire story saying the iconic singer was in a physically violent altercation with Patti LaBelle, 69, as iMediaEthics previously reported.

iMediaEthics spoke with Franklin’s lawyer, Arnold Reed, recently for more about the fake story, the possibility of a lawsuit, and the effect of these types of stories.

“We’re moving toward an era in this country, where truth doesn’t matter….You turn the internet on, you see these false stories, these false sites, and what it really boils down to is this site has made a lot of money off lies, and it is exploiting” Franklin, Reed said by phone.

“God help us all if the First Amendment protects that.”

In this particular case of the false claim that Franklin was attacked by LaBelle, “This is not press, this is not true journalism,” Reed said. “This is blatant lies and reckless disregard for” the truth.

Reed knows something about journalism. He was trained as a lawyer at the University of Iowa and as a journalist through his degree from IU-Bloomington and work at the Detroit Free-Press and other news outlets before starting law school.

“This is just garbage, plain and simple,” he called the brawl story.

He guesses that the fake story was a spin-off of a real incident in which Franklin didn’t recognize LaBelle in a social situation, Reed told iMediaEthics.

“Several weeks ago, Aretha was singing in I believe the White House for the President, and she was getting ready to get up on stage, was walking through a line of people on either side of her” and LaBelle reached out to greet her, according to Reed. Franklin didn’t immediately recognize her given the confusion of negotiating the crowd. Rumors soon followed that the two were feuding.

“What [the media] didn’t show was that after this…Aretha and Patti were hugging,” Reed said. “They’re friends.”  The media didn’t capture photos of this, Reed said to iMediaEthics.

Even the date cited in the story was fake.

On the date of the supposed brawl named in the satire News Nerd story, Franklin was in fact “half-way across the world.”

News Nerd says it was satire

It only had a note at the bottom of the website.

The story currently has a disclaimer before the article begins. See below.

iMediaEthics highlighted where News Nerd added a disclaimer to the story after publication, according to Franklin’s lawyer.

The disclosure at the top of the story reads “The stories posted on TheNewsNerd are for entertainment purposes only.” iMediaEthics notes that this doesn’t actually indicate the stories are fake.

The disclosure at the bottom of the website, however, does. It states “The stories posted on TheNewsNerd are for entertainment purposes only. The stories may mimic articles found in the headlines, but rest assured they are purely satirical.”

But, it is very low on the website. See image below.

See the whole News Nerd website. At the very bottom there is a disclaimer.

And, despite that disclaimer that hardly anyone will see, at the bottom of the website, News Nerd labels itself a news site. See below Google search results.

Reed flagged that readers probably didn’t see the disclosure at the bottom of the website.

“Who gets that far?” Reed asked. “Most people don’t get past the first one to two paragraphs” of a report and wouldn’t likely see the disclaimer, he argued. The “entertainment” label, posted atop the story, was added after the story went viral, he said.

But that was too late, Reed said. “Here’s the inherent problem with how this thing works,” he said. “It’s like a cancer spreading. Legitimate news outlets pick the story up and start re-running it. USA Today, other major publications, pick this story up and ran with it.” And then the fake news of an Aretha Franklin, Patti LaBelle story is out there, Reed explained.

Over the next week or so, Reed said he’s reviewing not just whether Franklin would be successful in a lawsuit against TheNewsNerd.com but also what remedy he has with other media that also failed to fact check and went ahead and picked up the hoax story.

Reed added that his team is reviewing online news stories that were based on the News Nerd story to see if they have updated or corrected to acknowledge the report of a brawl was not true. “If we’re able to find some that have not done that, the litigation possibly may extend to them,” he said.

The First Amendment and the satire label “makes it a little bit more difficult legally to challenge” the story, Reed said, but he is going to “look to see if there are any legal avenues that can be pursued.”

The News Nerd previously made headlines with its fake story claiming George Zimmerman sold a painting of Trayvon Martin.

Is this satire story a matter of public interest?

“These stories have no social redeeming value whatsoever,” Reed said. “Quite frankly, it flies in the face of ethics and journalistic writing.”

As such, Reed said he plans to see if that disclaimer of satire will protect the article legally.

“The issue becomes, does the First Amendment protect lies essentially? It’s not satire, it’s lies,” he said. “If we do wind up filing a lawsuit, I’ve gotta be hard-pressed to believe that a court would not recognize it for what it is — a reckless disregard.”

Further, Reed said there must be a distinction between freedom of the press and the right to privacy.

“Just because you are a public figure…we have got to draw the line in our society” between freedom of the press and privacy. He said that the fake story “creates a lot of difficulty” and “messes with the person’s career and livelihood.”

Reed said he has not been in contact with News Nerd as of yet and that his only plan to be in touch would be if there is any legal action. He said he expects the site defends its story as satire given that the story is still on its website.

iMediaEthics wrote to News Nerd via Facebook, as its website contact form didn’t work the multiple times we tried. We asked them for a response to Reed’s comments to us.

We received a curious response from the News Nerd account. See below.

Since profitable clicks result for them from using fake news stories labeled satire as bait–iMediaEthics was amused that The News Nerd called us leeches, given that it deals in tricking readers that will likely never see their so-called disclaimer at the bottom of the website.

iMediaEthics responded to the message repeating our questions based on our original interview with Reed, the lawyer for Franklin.

We have not heard a response from News Nerd.