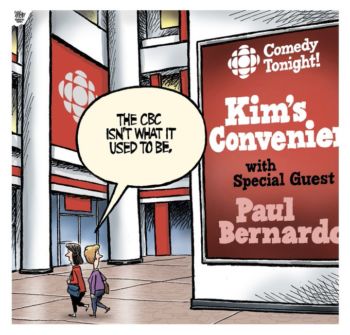 The Canadian Broadcasting Corp. complained to the Toronto Star about an editorial cartoon depicting the CBC’s sitcom Kim’s Convenience.

The cartoon showed two women walking by a promotional post for Kim’s Convenience that said the show would have a special guest, Paul Bernardo. Bernardo is a Canadian serial rapist and murderer.

The woman passing by says to the other woman, “The CBC isn’t what it used to be.”

The CBC’s spokesperson Chuck Thompson told iMediaEthics by e-mail, “Our letter to the editor speaks for itself and we are taking no further action.” We’ve written to the public editor’s office to ask if it will review the issue; Star public editor Kathy English is on leave until late August.

The cartoonist, Moudakis, told iMediaEthics, “The cartoon speaks for itself” and declined to comment further.”

In a letter to the editor published by the Toronto Star, CBC spokesperson Chuck Thompson argued the cartoon was “as insensitive as it is irrelevant and distasteful.”

“I am writing on behalf of the CBC in response to the Theodore Moudakis editorial cartoon that appeared in your paper on July 25. The image is as insensitive as it is irrelevant and distasteful. In attempting to feed on inaccurate rumours about The Fifth Estate doing a series on Paul Bernardo, the cartoon makes light of a convicted serial killer while maligning a beloved, independent comedy production. Kim’s Convenience has absolutely no connection to any of this other than being unfairly used by Mr. Moudakis in a vile attempt at humour on the backs of three murder victims.”