Bikers' Angst? What do 5 Polls Say about Bike Lane Anxiety?

Bikers’ Angst? What do 5 Polls Say about Bike Lane Anxiety? 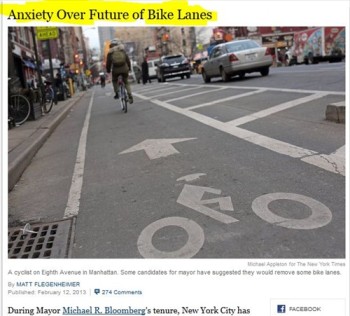 Is there really 'anxiety over future of bike lanes' as the New York Times reports? (Credit: NYT, screenshot, highlight added)

According to a recent article in the New York Times, the city’s bike riders are anxious about the future of bike lanes in the post-Bloomberg era. The “cycling haven” created by Mayor Bloomberg’s expansion of bike lanes may lead to a “reckoning,” with perhaps a new mayor willing to curtail some of the current bike lanes and even worse, not supporting Bloomberg’s nascent bike-sharing program.

But what about the overwhelming public support revealed by the Times/CBS poll just six months ago (August, 2012)? Sixty-six percent of the poll respondents said the expansion of bike lanes was a “good idea,” while only 27% thought it a bad idea. Dare any of the mayoral candidates reignite a controversy that Howard Wolfson, a deputy mayor, says would be “unwise”?  “The great bike war is over,” he asserted, “and the opponents lost.”

As it turns out, the Times/CBS poll produced virtually identical results to a Marist poll conducted a year earlier, also with 66% of its respondents saying they supported bike lanes in New York City, and 28% expressing opposition.

But as I pointed out in August 2011, the Marist poll and a similar set of Quinnipiac polls conducted in May and July of that year, were highly flawed. Like the Times/CBS poll, they don’t really measure support or opposition to the expansion of bike lanes in New York City, but instead measure a more general feeling about how great it is to ride bikes.

The fact is that a majority of New Yorkers really don’t know much about the bike lanes and don’t care much, one way or the other, about Bloomberg’s pro-bike policies. To demonstrate that point, iMediaEthics conducted its own poll in August 2011. For half the sample, the poll was conducted using the flawed methods of Marist and Quinnipiac (and the recent Times/CBS poll), and produced very similar results. But for the other half of the sample, the iMediaEthics poll used more rigorous methods to determine who had a meaningful opinion and who did not.

The result: Among people who really care about the issue – who express strong opinions either for or against the expansion of bike lanes in the city – opinion is about evenly divided. Specifically, the poll found 23% of New Yorkers strongly in favor of the bike lane expansion, 20% strongly opposed, and the rest – 57% – so unengaged on the issue they didn’t mind whether there was an expansion of bike lanes or not.

Why did the other pollsters, including the recent Times/CBS poll, find a large majority in favor? Because the pollsters refused to measure how many people even knew about the bike lane or really cared. The pollsters were measuring “non-opinion” and treating it as though it represented the will of the public.

One good indicator of this result can be found in that Times/CBS poll last August, which showed that only 11% of New Yorkers had heard “a lot” about the new bicycle sharing program in the city, with two-thirds saying they had heard “not much” (27%) or “nothing at all” (40%).

So, if the vast majority of people don’t really know much (or anything) about the mayor’s bicycle program, how they can say it’s a “good idea”? Obviously, they can’t. And that’s what’s important to understand about these polls.

They’re not measuring people’s reactions to Bloomberg’s policies, as much as they’re measuring the idyllic notions people have about how wonderful it is to ride bikes. But as the iMediaEthics poll made clear, when it comes specifically to the expansion of bike lanes in New York City, the people who feel strongly about the issue are about evenly divided – with a majority along for the ride either way.

What this means for the mayoral election is that the bike lane issue is still in play. Most voters aren’t going to punish or reward candidates for their views on bicycle lanes, but there is a significant portion of the electorate for whom the issue really matters. Unlike what the polls say, those who strenuously oppose the bike lanes are about equal in number to those who strongly support them.

That description, of course, is among city residents generally. The bike issue will obviously play differently in different neighborhoods. And candidates of whatever persuasion will be well advised not to assume the issue is “settled.”

Bikers’ Angst? What do 5 Polls Say about Bike Lane Anxiety?