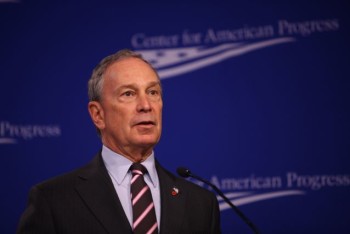 The Washington news director at Bloomberg Politics, Kathy Kiely, quit her job over the company’s policy about covering the possible presidential candidacy of founder Michael Bloomberg.

Kiely was apparently unhappy about Bloomberg Politics’s coverage of the possibility that Bloomberg, former mayor of New York City, was considering running for president. The New York Times broke the story, and Bloomberg Politics reported on the Times’ coverage, CNN noted.

Kiely told iMediaEthics her decision was “spontaneous” after the reports about Bloomberg considering running for president.  “I had assumed I would be working for Bloomberg Politics at least through the election but the decision by the founder—a man the company by policy did not write about—to become a factor in that contest made it, I thought, impossible for me to do my job,” she said.

“I did not feel we could cover the Bloomberg trial balloon in the aggressive way I thought it deserved,” Kiely said to the Huffington Post about her decision to quit less than a year after having been appointed the Washington editor for Bloomberg Politics.

Kiely told iMediaEthics she hasn’t figured out what she will do next, but would like “to do some teaching and some writing and — my biggest dream — figure out a way to share my newsroom skills and, dare I say it? values, more broadly. In an information age, I think every citizen needs to think like a journalist.”

Bloomberg News spokesperson Ty Trippet sent iMediaEthics a statement about Kiely’s resignation and concerns defending the amount of coverage Bloomberg News has given to Bloomberg. “We’ve covered the speculation every day since the Times story was published,” he said. He added that Bloomberg News’ editor-in-chief John Micklethwait “is in charge of decisions about coverage.”

Bloomberg News sent iMediaEthics its reporting guidelines on Bloomberg, which state that “Bloomberg News doesn’t originate stories about the company,” instead permitting reporters to summarize what other outlets say about Bloomberg when newsworthy.

Bloomberg News is in a conundrum because if it covers Bloomberg positively, it looks like they’re helping their founder out. If they cover him negatively, it could be perceived as a shot against Bloomberg.

“Whenever we name Michael Bloomberg in a story, we disclose his role as founder and majority owner of Bloomberg LP. When writing about his actions as a newsmaker, we should call him for comment as we would contact any other public figure. Bloomberg News doesn’t cover Michael Bloomberg’s wealth or personal life.”

“I think that Michael Bloomberg has built a terrific news organization but that he needs to liberate it to cover all the news, even the news about him” Kiely told Politico. “Anybody who enters the political fray should be covered in the same way, with the same level of aggressiveness, and I did not feel that was happening in the case of Mayor Bloomberg.”

Ad Week‘s Fishbowl NY noted that Kiely received much support online for her decision. Kiely told iMediaEthics, “I am shocked and awed, to coin a phrase, over the outpouring of support from friends and colleagues. It means a lot to me personally but more importantly I think it says something about how much people value the notion of a free and uncensored press. That’s important for something much bigger than me.”

iMediaEthics wrote back in 2014 about Bloomberg News’ policy on covering Bloomberg given the “inherent conflict of interest.”