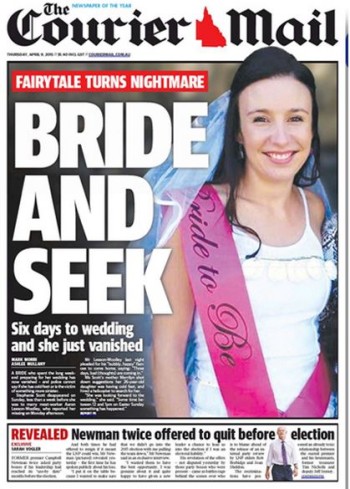 The Courier-Mail‘s April 9 story was headlined “BRIDE AND SEEK” with subheads “FAIRYTALE TURNS NIGHTMARE” and “Six days to wedding and she just vanished.”  The woman, Stephanie Scott, went missing April 5 and was set to be married April 11.

“The article reported circumstances surrounding the woman’s disappearance after she was last seen four days prior to publication,” the press council reported.

But the article upset readers because it suggested the disappearance could be either “cold feet” or “something more sinister.” And it turned out to be very sinister, because the police said the morning the article went out it planned to charge a suspect with Scott’s murder, a suspect they had been questioning since the day before.

See below the front-page from the Courier-Mail via Media Watch. 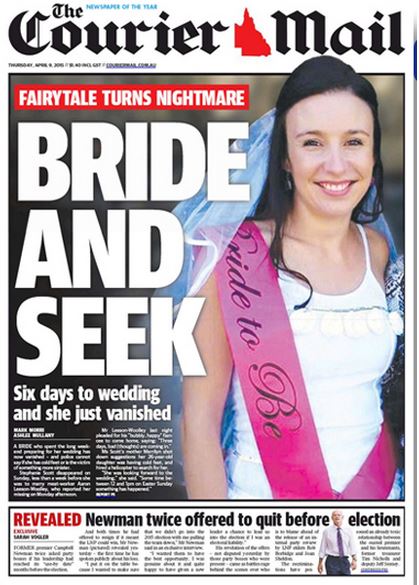 The Courier-Mail defended its headline as based on what the newspaper knew at the time of publication, what the police were saying at the time, and the story of Stephanie Scott’s disappearance. Further, “the publication noted the article was consistent with other media reports on the disappearance and canvassed a number of lines of enquiry, including suggestions that she may have experienced ‘cold feet,'” the press council reported.

The newspaper added that they didn’t want to “make light of a shocking event” and when the police said Scott’s disappearance was being treated as a murder investigation, the Courier-Mail amended its online story with the news.

While the press council said it “accepts” the newspaper didn’t know the woman’s disappearance was turning into a murder investigation, it argued that using the “very prominent ‘Bride and Seek’ headline and the front-page treatment it received was still offensive, in addition to the lighthearted tenor of the headline.”

At the time, the Courier-Mail‘s editor Christopher Dore told Media Watch: “When The Courier-Mail published, it was believed to be a case of a runaway bride … Everyone at The Courier-Mail was horrified, like the rest of the country, to discover the next day the tragic circumstances around the disappearance. … once The Courier-Mail became aware of the nature of the unfolding events we removed the page from digital platforms.”

News Corp. Australia’s Head of Corporate Affairs Stephen Browning told iMediaEthics by e-mail the paper had no comment on the ruling.