Brisbane: NYT Should Restrain Itself in "Fringe" Story Reporting - iMediaEthics

Brisbane: NYT Should Restrain Itself in “Fringe” Story Reporting 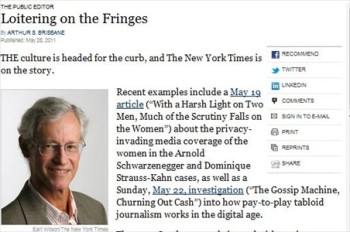 Brisbane’s column noted that recent stories by the Times have reported details on “the privacy-invading media coverage’ of the woman Arnold Schwarzenegger had an affair and child with and the woman accusing Dominique Strauss-Kahn of sexual assault, among other stories on tabloids and obscenity.

In the case of one of the Times’ stories on the woman alleged in the Schwarzenegger affair, Brisbane commented that “the story took a kind of anthropological approach, donning latex gloves to report on how others were reporting the story — chronicling, as it were, others’ low standards.”

Brisbane advised the Times use “more restraint” in reporting on some of these culture stories.  As Brisbane explained, the Times could keep its standards and let other media outlets report some of the questionable culture and “fringe” stories.

“True, other media are indulging in questionable journalism, and it is difficult to resist the downward revision of standards. But The Times could just as easily pull back, recognizing that its readers don’t need and aren’t relying on it to chronicle these badlands. Other news outlets are more than willing to go there.”

Brisbane: NYT Should Restrain Itself in “Fringe” Story Reporting