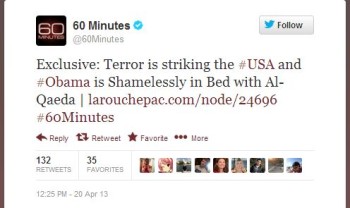 The fake tweet read, pictured above, “Exclusive: Terror is striking the #USA and #Obama is Shamelessly in Bed with Al-Qaeda,” along with a link to LaRouchePac.com. That is the website for Lyndon LaRouche’s political action committee, which says it is “what stands between you and an otherwise inevitable collapse of civilization.”

PLEASE NOTE: A message that was posted earlier to this account was not written or sent by @60minutes or its staff.