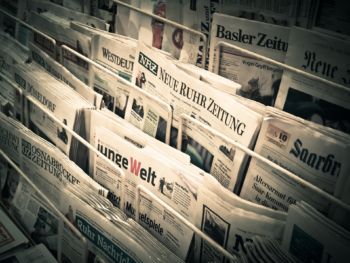 Many of the media corrections we’ve highlighted this decade have been issues relating to geography, misspelling, money conversions, and using the wrong name or photo with a report. That said, we often come across corrections that are eye-catching because of their funniness, weirdness, or consequence. In honor of the end of the decade, we take a look back at some of the highlights:

A January 2018 Associated Press correction — sit and shiver or sitting shiva?: “In a story Feb. 22 about the Florida school shooting, The Associated Press misquoted Broward County Sheriff Scott Israel in some versions of the story when he spoke about the families of the victims. He said, ‘I’ve been to their homes where they’re sitting shiva,’ not ‘where they sit and shiver.’”

A January 2018 Politico correction — Frodo or Fredo: “An earlier version of the story misidentified the fictional character name Bannon uses to refer to Jared Kushner as Frodo, a ‘Lord of the Rings’ reference, rather than Fredo, a reference to ‘The Godfather.'”

A 2012 Economist correction: “Correction: An earlier version of this article claimed that journalists at Bloomberg Businessweek could be disciplined for sipping a spritzer at work. This is not true. Sorry. We must have been drunk on the job.”

A 2018 NPR correction — magnet or magnate: “A previous version of this story, in which Sam Nunberg was quoted calling the president a magnet, should have said magnate.”

A 2018 Omaha World-Herald correction — Sir Mix-a-Lot and Big Butts: “An earlier version of this story referred to Sir Mix-a-Lot as a ‘big-butt-loving rapper.’ Although Mix-a-Lot is well-known for saying he ‘likes big butts and he cannot lie,’ he does not profess to love them. We deeply regret the error.”

A 2018 NPR correction: “A previous Web introduction to this story incorrectly said that Mihaela Minca hasn’t paid taxes since the Romanian government backed down when she and fellow witches threatened to hex tax collectors. In fact, it was Minca’s mother-in-law who hexed the tax collectors.”

A 2012 Bangor Daily News correction: An earlier version of this story should have said BPA potentially affects the mammary gland. The story incorrectly identified the organ as the memory gland.

A 2014 correction that took a century and a half from the New York Times: “An article on Jan. 20, 1853, recounting the story of Solomon Northup, whose memoir ’12 Years a Slave’ became a movie 160 years later that won the best picture Oscar at the 86th Academy Awards on Sunday night, misspelled his surname as Northrop. And the headline misspelled it as Northrup. The errors came to light on Monday after a Twitter user pointed out the article in The Times archives.”

NBC News reported in a tweet that ISIS fighters were shaving bears to hide, but they were really shaving their beards.

A 2017 Washington Post correction: “EDITOR’S NOTE: This story has been updated to more precisely describe White House press secretary Sean Spicer’s location late Tuesday night in the minutes before he briefed reporters. Spicer huddled with his staff among bushes near television sets on the White House grounds, not ‘in the bushes,’ as the story originally stated.”

Two amusing corrections were the result of browser plug-ins that changed text.

A 2018 Wall Street Journal correction: “An earlier version of this article incorrectly stated Benjamin Netanyahu said Moses brought water from Iraq. He said the water was brought from a rock.”

A 2019 GQ correction: “NOTE: This story has been updated. Alexander Vindman received a Purple Heart after being wounded by an IED, or improvised explosive device, not an IUD, or intrauterine device. We regret the error.“

A 2019 Financial Times correction: “An earlier version of this article incorrectly stated that the Salt Lake Tribune has a full-time jazz reporter. It in fact has two reporters who cover Utah Jazz, the local basketball team. This has now been corrected. “

A 2016 New York Times correction: “Because of an editing error, an article on Monday about a theological battle being fought by Muslim imams and scholars in the West against the Islamic State misstated the Snapchat handle used by Suhaib Webb, one of the Muslim leaders speaking out. It is imamsuhaibwebb, not Pimpin4Paradise786.”