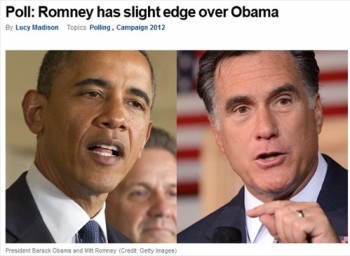 See above a screenshot from the CBS News/NYTimes poll. (Credit: CBS, screenshot)

Asking respondents who they will vote for in the presidential election several months away is a bit problematic. A lot of people simply haven’t made up their minds yet and won’t begin to think about the candidates until the fall.

Pollsters get around the problem of voter uncertainty by pressing respondents to say who they would vote for “if the election were held today.” The responses from many are superficial and could easily change, but pollsters at least get a number they can report.

O.K. That’s pretty standard procedure for pollsters. But there’s a caveat. To avoid slanting the poll toward one candidate or another, pollsters typically don’t ask a bunch of issue questions before asking voters who they expect to support. Why? Because asking about issues can cause some respondents, especially the undecided ones, to think of the election in terms of that issue – and that could bias the sample.

Suppose, for example, the first questions in the poll dealt with, say, whether people approve or disapprove of the killing of Osama bin Laden. Most Americans reacted favorably to that action. By reminding respondents of that success, and then asking the same respondents who they would vote for if the election were held today, pollsters would have probably skewed their poll results in favor of Obama.

The problem of biasing the sample is so well-known among pollsters that they wouldn’t dare ask any policy questions in their last pre-election poll. That is the poll that will be compared against the actual election results to see how accurate the pollster is. That is the “reputation” poll, and pollsters will do everything possible to be as accurate as possible.

Yet, during the election campaign, some pollsters are not as careful with their polling design. They know that whatever figures they come up with, there is no way to check them against the results of the actual election – which is still months away. So they can skew their poll results and no one will know.

That’s what the CBS/New York Times pollsters did in their most recent poll. Prior to asking respondents who they would vote for in the presidential election, the poll asked three questions:

“Do you approve or disapprove of the way Barack Obama is handling his job as President?”

“Do you think the economy is getting better, getting worse, or staying about the same?”

Having just prompted respondents to think about the economy, the poll found that “Romney has a slight edge over Obama” – a 3-point lead. I wonder what their results would have been had they asked the economy questions later in the survey.

It doesn’t take a genius to know that most people these days have a negative view of the economy. Reminding respondents about the bad economy just before asking who respondents favor in the election is not something the CBS/New York Times pollsters would even consider doing in their final pre-election poll – the one they really, really want to be accurate.

So, why did they do so in the latest poll when they wouldn’t do it in their final pre-election poll?