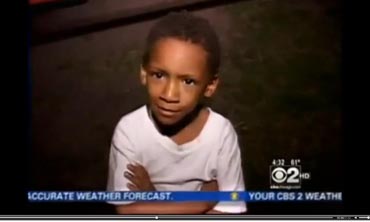 CBS-affiliate WBBM has apologized for airing this boy's comments out of context. (Credit: Maynard Institute via Mediaite, screenshot)

WBBM reported the child saying that a local shooting “didn’t scare him and that, when he grows up, ‘I’m going to have me a gun.'”

The NAACP’s president, Ben Jealous, criticized the station for using the child’s comments out of context, according to Mediaite.

Gawker reported that the station apologized for “the mistakes that were made, both in the reporting and editing of the story… The video of the child should not have aired.”

“We have long been worried about the ways in which the media helps perpetuate negative stereotypes of boys and men of color, but this appears to be overtly criminalizing a preschooler.”