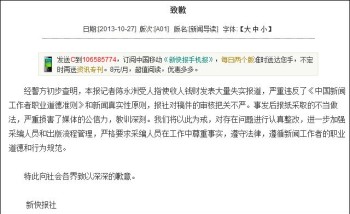 Unlike in the United States, allegations of defaming a company can land you in jail in China.

Chinese journalist Chen Yongzhou admitted that he made up stories about the”state-run” company, Zoomlion, in exchange for cash. But that admission only followed his arrest for publishing stories that hurt Zoomlion’s reputation, CNN reported.

Chen’s reporting for his newspaper, New Express, “alleged that Zoomlion, “a construction machinery company,”  had exaggerated its profits and manipulated the market,” the China Media Project reported Oct. 23. The stories “resulted in losses for the company,” CNN reported. According to Bloomberg, after Chen’s admission of lying, Zoomlion’s stocks rose.

Chen had been arrested Oct. 18 and accused of hurting Zoomlion’s “business reputation” because of his reporting.

Then, days after his arrest, which his newspaper New Express originally protested, Chen made an on-air confession on China’s CCTV to faking the stories. He said in the CCTV interview that he published fake reports “because I hankered after money and fame.” Chen added, “I’ve been used. I’ve realised my wrongdoing,” the BBC reported.

Chen further commented to Reuters: “If I were given one more chance to be a journalist, I must follow the basic journalistic ethics that are impartial, real, objective and complete to report — and would not be lured by self interest.”

Chen said he was paid “ranging from thousands of yuan to tens of thousands of yuan” for his faked stories, China Network TV reported. He didn’t identify who paid him. One thousand yuan is about $164.

According to CNN, Chinese-government owned Xinhua News said Chen was responsible “more than 10 unverified reports” published between Sept. 29, 2012 and Aug. 8, 2013.

After Chen’s confession, New Express apologized for its failures in fact checking his reports. The BBC’s translation of the New Express apology reads in part: “This newspaper was not strict enough about thoroughly fact-checking the draft of the report.”

Business Week quoted Jeremy Goldkorn as speculating there was “some political element” to Chen’s apology. Goldkorn is “founding director of Danwei.com, a Beijing-based firm that researches China’s media and Internet.”  Goldkorn is quoted as saying “I don’t know the specifics of this case, but you don’t get a confession on CCTV unless there is some political element to it.”

He also pointed to New Express‘s published apology for Chen’s reporting , suggesting that since the apology was published “in a tiny corner, it doesn’t look like a very sincere apology.”

And The Guardian noted that Chen’s confession was “the latest in a series of televised confessions by suspects in high-profile or politicised cases.” According to The Guardian, “Rights activists have said that public confessions in China are often forced and violate the accused’s right to due process.”