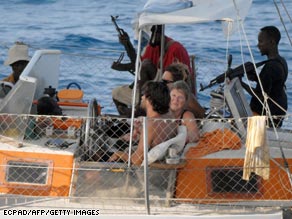 CNN uses this image for its article that exclaims two Somali men vow revenge! CNN's caption: "France launched a military operation to free French citizens held by pirates on a yacht called the Tanit." It is notable that the two non-CNN journalist sources (who interviewed the two "pirates") and their news organization employers, are all unnamed by CNN.

You read the headlines: CNN blares “Pirates vow to kill U.S., French sailors.” It is certainly exciting. A “vow” of violence is dramatic and fear-inspiring…but StinkyJournalism has questions.

What backs up this claim? Is there a pirates’ union speaking out? Is there a statement from a pirate leader or from a press release or pirate flack? Apparently not.

The first sentence reads that only “two pirates in Somalia vowed revenge Monday.” Is this a misuse of journalism’s “two source rule“? (“Every fact must be independently confirmed by two independent sources before it can be taken as reliable” If two pirates say it…print it).

Worse, CNN qualifies in the body of the article that the pirate spoke to “a Somali journalist” –not directly to CNN. Therefore, CNN does not have firsthand knowledge. Moreover, they don’t name the journalist or the news outlet.

Yet CNN boldly quotes from the unnamed Somali’ reporter’s interview with a pirate: ” ‘We have decided to kill U.S. and French sailors if they happen to be among our future hostages,’ said Abdullahi Ahmed, a member of a pirate group based at Harardhere, a coastal town in central Somalia.”

The second pirate, and only other CNN source for the frightful pirate vow, is also quoted: “The military actions angered Ali Nur, a pirate who is based in Gara’ad, a coastal village in the semi-autonomous region of Puntland, in northern Somalia. ‘From now on, after the killings by the U.S. and France, we will add some harsher steps in our dealings with hostages, particularly American and French hostages,’ Nur told a journalist.”  Which journalist? What news organization? CNN does not say.

CNN continued, giving the second, seemingly random “pirate” a platform: “Nur issued a warning to the United States. ‘The killing of our boys was aggression, and the U.S. will see what they get from their operation,’ he said.”

To maintain readers’ trust, CNN needs to be more serious about its reportage. Trying to pass off as credible –two random Somali men (who may or may not be pirates or have views like others in two pirate groups); two unnamed journalist sources who work for unnamed news outlets–is discouraging and an ocean away from what we, the public, expect from CNN.