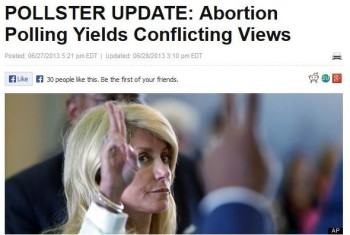 In a recent blog post, HuffPost Pollster noted apparent conflicts in polling on abortion (for a better example than the ones provided by Pollster, see my post last week —  Should Abortion Be Legal in Most Cases? CNN and Quinnipiac Polls Differ by 44-Point Swing).

Pollster then went on to implicitly excuse the pollsters and blame the public for the conflicting results, citing Washington Post polling director, Jon Cohen: “[I]t’s not really about not believing polls, rather that polls can’t give simple answers when no simple answers to be had.”[sic] [@jcpolls]

Pollster also cites previous exculpatory writings, which essentially blame the public for not being able to give legitimate responses:

“The lessons are not new. Consider this review, written twenty-four years ago by Karen Tumulty for the Los Angeles Times: ‘Abortion is a topic that leaves most people feeling uncomfortable and confused. Theirs is “a conditional, complex, middle position,” says Thomas W. Smith of the University of Chicago’s National Opinion Center, which has been tracking public sentiment on abortion since the early 1960s….’”

Yes, Smith is right, that many, if not most, people have a “conditional, complex, middle position,” but that does not mean – as Tumulty then concluded – that people are necessarily “uncomfortable and confused” about the issue.

She would have us believe that this issue is so special and sensitive compared with other policy matters, wildly contradictory polling results on abortion are to be expected. That’s also the implicit message that Pollster is promulgating, by citing her 24-year-old article.

But, in fact, abortion is not that special – at least when it comes to producing contradictory poll results. Here are some examples, taken just from my posts on iMediaEthics (though there are many, many others that could be cited):

With so many examples, we can’t excuse the pollsters again and again by blaming the people for being “uncomfortable” and “confused,” thus preventing pollsters from discovering what the public is thinking.

The Post’s Cohen says that polls can’t give simple answers when the issue itself is not simple. So, who’s to blame? Who is asking for simple answers? Certainly not the public.

There is a larger issue. Smith, from the University of Chicago’s National Opinion Center, points to the fact that on abortion, most people have a middling position. And, I would argue, that observation applies not just to abortion, but to virtually all major public policy issues.

But for the most part, pollsters simply don’t try to measure the “conditional, complex, middle position” of the public, but insist on question formats that pressure people with middle positions to choose one side or the other.

As long as this practice continues, the trend of contradictory poll results will continue. And it’s the pollsters who are to blame, not a “confused” or “uncomfortable” public.