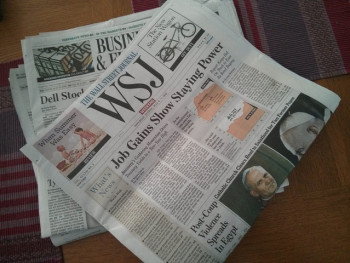 And it’s time for our latest installment of entertaining or newsworthy corrections, beginning with which country Kim Jong Un leads.

NPR tweeted the following correction with a screenshot of the error, “An earlier tweet misidentified Kim Jong Un as the leader of South Korea. He is the leader of North Korea.”

2. Michigan news/talk radio station WSJM reported that a local man had died after a motorcycle accident, but in fact, the man, Alan Hatten survived. The Sept. 20 correction reads:

“This morning, we gave an update to a story we had last week regarding a motorcycle crash in Hagar Township that badly injured Alan Hatten of Watervliet. In that story, we erroneously reported that Mr. Hatten had passed away from his injuries. Our story was based on information that we have since learned was not accurate, and we have retracted the story. Our newsroom is reaching out to several Berrien County agencies for an update on his condition. Please accept our sincere apologies for the story.”

3. The Associated Press wrongly claimed that its reporter overheard Sen. Lindsey Graham (R-SC) talking to another senator on the phone at Reagan National Airport in Washington D.C. In fact, Graham was on a phone interview with Fox News’ Sean Hannity. The Associated Press’s article carries the following correction:

“This story has been corrected to reflect that Graham was speaking in an interview, not with a fellow senator.”

The AP also noted the error in the text of its updated story, which states,

“Graham made his comments in an overheard cellphone call in front of a passenger at Reagan National Airport before he boarded a flight. They were misinterpreted by The Associated Press as being delivered to a fellow senator. Graham’s office did not dispute that interpretation when asked about the comments and did not say who was on the call with the senator. It turned out to be Hannity.”

4. TownHall.com fell for a fake tweet that purportedly showed Keith Olbermann tweeting profanity at Pres. Donald Trump.  In place of its Aug. 31 article, TownHall posted the following correction and retraction:

“Correction: This piece originally covered a tweet reportedly sent via Keith Olbermann in which he ranted against President Trump in R-rated fashion. Actor James Woods provided a screenshotof the tweet in question, but shortly after admitted it was a fake. On Thursday, Olbermann directly responded to Townhall confirming that the tweet in question was a fake. As such, I will certainly honor his hashtag and apologize -> I’m sorry.

Hey @obrienc2 + @townhallcom you do realize this is not just a fake but a badly done one? Even @jameswoods realized it was a fake #Apologize https://twitter.com/townhallcom/status/903275792112680961 …

“Also, to our readers, we jumped the gun here. We will certainly strive to do better.”