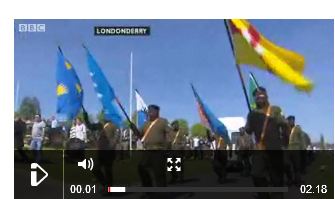 A screenshot from the BBC's April 2011 report on the Real IRA rally. (Credit: BBC, screenshot)

A Northern Ireland court dismissed the call for the BBC to provide police with its footage from an April 2011 parade, Journalism.co.uk reported.  The police wanted the footage to identify participants of “a Real IRA parade in Derry,” according to the Press Gazette.

According to the Derry Journal, during the parade, “One of the masked men then delivered a speech on behalf of the Real IRA threatening anyone who gave support to the PSNI, including members of the GAA and Catholic hierarchy. The group also threatened Queen Elizabeth II ahead of her visit to the Republic.”

The judge, Tom Burgess, found that the police’s bid for the footage failed to “show how footage of the parade could assist police in identifying the men, or prove the video would be of substantial value in its investigation,” according to Press Gazette.

The BBC reported  that previous parades similarly “included paramilitary elements and threatening speeches.” As such, the BBC argued that the police could have taped the parade if they wanted that form of evidence, according to the Press Gazette.    The police didn’t tape the parade and also didn’t “deploy officers to the annual event – a police helicopter did obtain some footage,” according to UTV.  “The BBC argued that police deliberately chose not to deploy resources, intent on using media coverage,” UTV wrote.

According to the Press Gazette, the National Union of Journalists called the ruling “extremely significant.”  In a press release on its website, the NUJ said it “welcomes the decision.”

We wrote in December when the UK National Union of Journalists criticized an order for BBC, ITN News and UTV News’s footage.  The police wanted unaired footage from the August Northern Ireland Apprentice Boys parade but the news networks argued that by giving it up, they’d act as “evidence gatherers.”

We also wrote in September when the BBC, Sky News, and ITN News had to turn over unaired footage from the August 2011 riots to police.