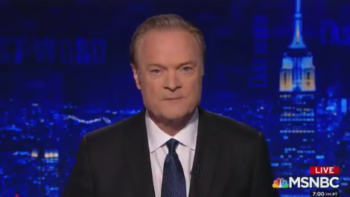 In an on-air apology and retraction Aug. 28 O’Donnell said, according to Mediaite, “Last night on this show I discussed information that wasn’t ready for reporting. I repeated statements a single source told me about the president’s finances and loan documents with Deutsche Bank. Saying if true as I discussed the information was not good enough.”

O’Donnell continued, “I did not go through the rigorous verification and standards process here at MSNBC before repeating what I heard from my source. Had it gone through that process, I would not have been permitted to report it. I should not have said it on air or posted it on Twitter. I was wrong to do so. This afternoon, attorneys for the president sent us a letter asserting the story is false. They also demanded a retraction. Tonight we are retracting the story. We don’t know whether the information is inaccurate. But the fact is, we do know it wasn’t ready for broadcast, and for that I apologize.”

Video of the retraction is embedded below:

His claims were made based on a single source whose claims were unverified, he said on air Aug. 27. Earlier today, O’Donnell tweeted to admit he made an “error in judgment” when he aired the claims, which he noted “didn’t go through our rigorous verification and standards process.”